Adena and Hopewell peoples lived in Pennsylvania and western New York, but this region represented the impoverished FRINGE of their culture (John E. Clark, “Archaeology and Cumorah Questions,” Journal of Book of Mormon Studies: vol. 13, no. 1, 2004, pp. 144-51).

In actuality, what was considered a weakness by Clark regarding our Western New York model is in fact a key element for true Book of Mormon geography. As was stated on our Lamanite page, the Book of Mormon is clear, other people existed prior to the arrival of Lehi’s group, and they were larger in number. Fringe Theory states:

The following illustration is an example of the Fringe Theory with the Ohio Hopewell [pre-existing Lamanites] as the parent or dominant culture and the New York Hopewell [Nephites] as the fringe: 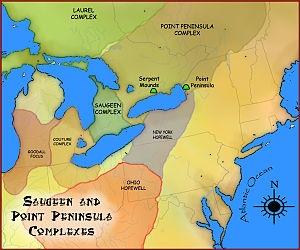 This is what William A. Ritchie said about Western New York:

“Apparently the presence of mounds and the artifacts of the mound culture represent the expansion of the parent culture beyond the limits of its home” (William A. Ritchie, The Archaeology of New York State, 1965, p. 94).

The Western New York model fulfills the requirements of Fringe Theory with two cultural groups, one dominant, whose base was south and west of Book of Mormon lands.