On a modern map the Land of Nephi Greater can be seen going north and east of Erie PA which is where Nephi’s ship docked. They were able to immediately till the ground because of a slow, gradual rise from the water of the Sea West (Lake Erie) to the Allegheny Plateau on the east. The ground was fertile with plenty of natural springs and other inland water sources. 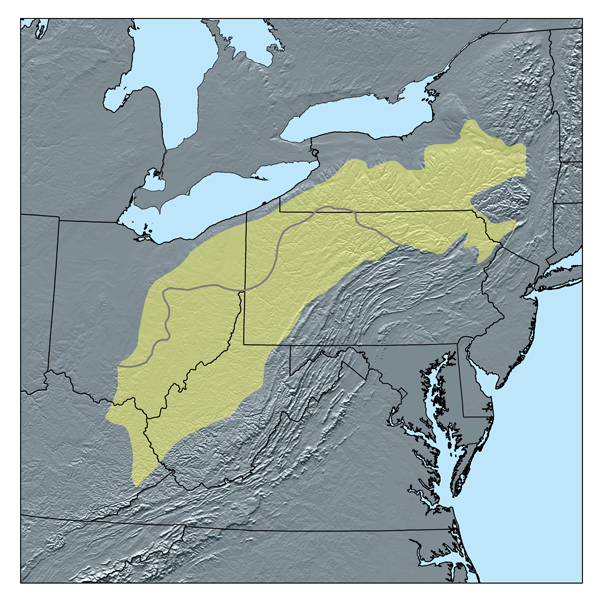 View from the Highlands. “From the summit of the hills on the south the view of the lake and the intermediate country is exceedingly beautiful. From this elevation in the west part of the town may be seen the borough of Westfield, the village of Barcelona, the two villages, Brocton and Centerville, in the town of Portland; and from a point farther east the boroughs of Fredonia and Dunkirk, and in a favorable state of the atmosphere the position and a dim outline of the city of Buffalo may be discerned in the far distance. The view of the lake dotted with vessels of various sizes and their sails trimmed to the favoring breeze, the Lake Shore railroad for a distance of twenty miles with its trains of living freight, or perhaps at intervals one or more laden with the commerce of the west or the oily products from the south, like huge saurians moving their bulky forms in the distance — the Buffalo, Corry & Pittsburgh railroad winding its way amongst and over the hills — the busy scenes of an active and stirring population engaged in the various duties of farm life, is at once beautiful, charming and elevating. Its equal is seldom seen. The view from the lake border south, with the hills as a background, is scarcely less admirable and fascinating. These views, however, are not confined exclusively to the town of Portland, but extend, with variations, from the state line on the west to Cattaraugus creek on the east. The inhabitants of the town, from their familiarity, scarcely appreciate their favorable locality or the beauty and charm of the scenery with which they are surrounded.” (Taylor, p.40)

“Although the streams of water are few and small and scarcely subserve the purposes of necessary manufacture, large springs are numerous and furnish an abundance of pure water, enough for all the purposes and conveniences of life. Some of these burst with considerable energy from the gravelly belt before spoken of, and furnish water in large quantities during the whole year. Springs are also found in almost endless profusion upon the side hills or northern slope of the great watershed, emanating from nearly every depression and from the crevices of the out-cropping rocks. Water is also obtained by digging to a moderate depth.” (Taylor, p.32)

The elevation of this ridge of hills or watershed is one thousand to twelve hundred feet above the waters of Lake Erie, and eighteen hundred to two thousand feet above ocean tides. So gradual is the rise from the level country along the lake to the summit that the whole surface is fitted for agricultural purposes and capable of a high state of cultivation.” (Taylor, p. 39)

“On the south side of lake Erie are a series of old fortifications, from the Cattaraugus creek to the Pennsylvania line, a distance of fifty miles. Some are from two to four miles apart, others less. Some contain five acres. The walls or breastworks are of earth, and they are generally on ground where there are appearances of creeks having once flowed into the lake, or where there was a bay. Hence it is inferred that these works were on the former margin of lake Erie, whence it has retreated from two to five miles.”

“These old forts afford a certain evidence of a large and crowded population, settled in towns which were defended by these forts, cultivating agriculture and commerce, and much further advanced in civilization than those inhabiting the same regions at the time of the discovery by Europeans.” (H.C. Taylor, Historical Sketches of the Town of Portland Comprising also the Pioneer History of Chautauqua County, 1873, p.45)

The Book of Mormon says they built roads and that’s what we find intersecting these towns:

“Old roadways are found in various places that evince a good degree of engineering skill. They are well thrown up, and no doubt were important thoroughfares leading to and from large towns or centers of population. Two of these no doubt have an antiquity coeval with the old fort, whilst those nearer the lake are evidently of more recent origin. The road leading from the site of the old stone school house on the old Erie road, in S. Dist. No. 3, south to the foot of the hill, occupies the bed of an old road thrown up and occupied by a busy multitude, possibly, two thousand years ago or more.”

“Excavations in this have shown a bed of large stones covered deeply with earth and gravel.”

“Of their origin and of the people who erected them, as with the origin of the old fort, we know nothing;” (Taylor, p.47)

Dr. Taylor conceded a more advanced race than then occupied the area had already been there before they arrived:

“We are prone to speak of ourselves as the inhabitants of a new world, and yet we are confronted with such evidences of antiquity! We clear away the forests and speak familiarly of subduing a ‘virgin soil,’ and yet the plow upturns the skulls of those whose history is lost! We say that Columbus discovered a new world. Why not say he helped make two old ones acquainted with each other? Our advent here is but one of the changes of time. We are consulting dumb signs, inanimate and unintelligible witnesses, gleaning but unsatisfactory knowledge of races that have preceded us. (Taylor, p.48)

These are things to keep in mind when identifying city loctions:

Previous: Mountains
Next: Others