[Update: Clark’s version 2.0 (Sept. 2011) has emerged after 22 years and contains the same omissions as before. Next to Brant Gardner (whose backyard IS on ancient Book of Mormon lands), we assign the medal of honor for accomplishing God’s design to delude Mormons the most to John Clark (who published the premier paper against there being One Cumorah).] 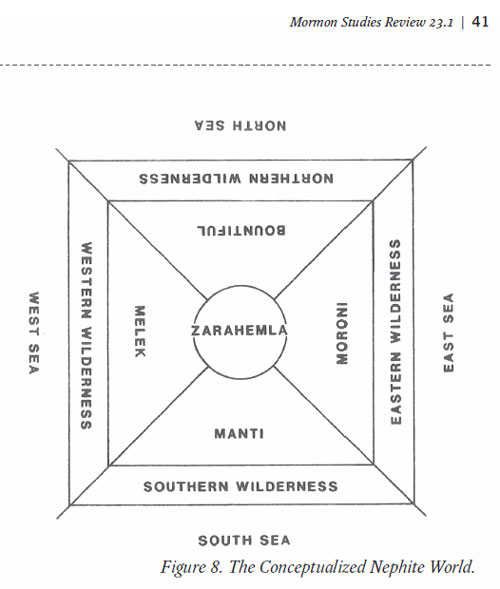 We repeat the problem we previously identified on the H38 Virus page about Clark’s model – the Sea South was not south of the Land Southward. His reluctance to correct this error after 22 years proves his model is the result of bias and should not be consulted.

It has been my experience that most members of the Church, when confronted with a Book of Mormon geography, worry about the wrong things. Almost invariably the first question that arises is whether the geography fits the archaeology of the proposed area. This should be our second question, the first being whether the geography fits the facts of the Book of Mormon-a question we all can answer without being versed in American archaeology. Only after a given geography reconciles all of the significant geographic details given in the Book of Mormon does the question of archaeological and historical detail merit attention. [A Key for Evaluating Nephite Geographies, John E. Clark, FARMS Review: Volume – 1, Issue – 1, Pages: 20-70, A review of “Deciphering the Geography of the Book of Mormon” by F. Richard Hauck, Provo, Utah: Maxwell Institute, 1989]

Clark gives “Ten Keys” for evaluating the plausability of a model:

1. A narrow neck (isthmus) separated the land northward from the land southward and was flanked by an east sea and a west sea.
2. Nephite and Lamanite lands occupied at least three times as much western coastline as eastern coastline.
3. The eastern wilderness was much wider and lower than the western wilderness but not nearly as wide as the southern wilderness.
4. The city of Nephi was in a highland valley; Zarahemla was in a large river basin.
5. The river Sidon flowed northward through Zarahemla.
6. The Waters of Mormon was probably a highland lake of significant size.
7. Zarahemla was surrounded by Nephite fortifications.
8. The city of Nephi was three weeks’ travel south from Zarahemla and near the Waters of Mormon.
9. The city of Bountiful was north of Zarahemla and near the narrow neck; it was about five days’ travel from Moroni and guarded the route to the land northward.
10. Cumorah (also called Ramah) was near the eastern sea, not very far north of Bountiful. [Ibid.]

Where are the borders? Shouldn’t those be identified before looking for rivers, valleys, or cities?

The seas bordering Book of Mormon lands, and the Ocean they crossed to get there SHOULD BE IDENTIFIED. They are absent, because they’re not important to his conception of Mesoamerica.

Clark fails to take his own advice. “Everyone else is wrong but I am right” mentality is apparent. Unless all seas spoken of are on an Internal Map, then bias is at work.

The hill the plates came from is not at issue; the question is whether this final resting place is the same hill where the ending battles occurred. Many serious scholars have attempted to prove that the Palmyra hill was the battle hill, but to little avail, largely because they do not understand archaeology as an inexact science. They argue that the Palmyra hill and its surrounding area once had tons of convincing evidence that has long since been destroyed or carted away.

Most proposals for the location of Mormon’s final stand fall into one of two possibilities: either the Palmyra hill or one in Middle America 2,000 miles to the south. Here I consider reasons for questioning the case for a New York location. I am unaware of any archaeological investigation of the hill itself, but sufficient information is available for the surrounding regions to make a critical assessment. [Source: “Archaeology and Cumorah Questions,” John E. Clark, Journal of Book of Mormon Studies: Volume – 13, Issue – 1, Pages: 144-51, Provo, Utah: Maxwell Institute, 2004]

First, Clark denies his advice and places archaeological data before the text. And by “text” we include the prophecies and promises tied to the land.

Thirdly, he ignores the “seas” that surround Cumorah:

I am convinced that the reference to a north sea and a south sea is devoid of any concrete geographical content…Any geography that tries to accommodate a north and south sea, I think, is doomed to fail. (Clark, 1989, p. 65)

To those trusting “The Johns of Book of Mormon Geography” (John Clark, John Sorenson, John Welch, John Lund, or John Tvedtnes) when it comes to Book of Mormon Geography, one must understand that they believe their bias is justified, even though it is against church canon, church history, prophecy, and the text of the book itself.