The East Sea bordered known Book of Mormon lands. It bordered the lands of Zarahemla, Bountiful, and Desolation. We must clarify “Land of Nephi” however before including it. The phrase “land of Nephi” is used to identify more than one land.

Nephi’s “Land of Nephi” bordered the West Sea, not the east.

27 And it came to pass that the king [Lamanite] sent a proclamation throughout all the land, amongst all his people who were in all his land, who were in all the regions round about, which was bordering even to the sea on the east and on the west, (Alma 22)

8 And the [Lamanite] land of Nephi did run in a straight course from the east sea to the west. (Alma 50)

34 And it came to pass that they did not head them until they had come to the borders of the land Desolation; and there they did head them, by the narrow pass which led by the sea into the land northward, yea, by the sea on the west and on the east. (Alma 50)

26 And it came to pass that Shiz did pursue Coriantumr eastward even to the borders by the seashore and there he gave battle unto Shiz for the space of three days. (Ether 14)

20 And thus it did come to pass that the people of Nephi began to prosper again in the land, and began to build up their waste places, and began to multiply and spread, even until they did cover the whole face of the land, both on the northward and on the southward, from the sea west to the sea east. (Helaman 11)

Not the Furthest Point East

3 And the Lord warned Omer in a dream that he should depart out of the land wherefore Omer departed out of the land with his family, and traveled many days, and came over and passed by the hill of Shim, and CAME OVER by the place where the Nephites were destroyed, and from thence eastward and came to a place which was called Ablom, by the seashore, and there he pitched his tent, and also his sons and his daughters, and all his household, save it were Jared and his family. (Ether 9)

If we identify the River Sidon, its head, and where the City of Zarahemla was, we can then look east for East Sea candidates. In our Western New York model, when you go directly east of the head of the River Sidon, the furthest candidate would be Leechworth State Park : 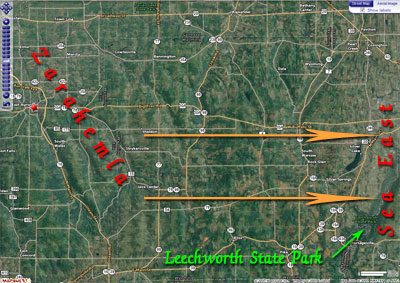 Leechworth State Park is called the “Grand Canyon of the East” it is so large with the Genesee River running through it: 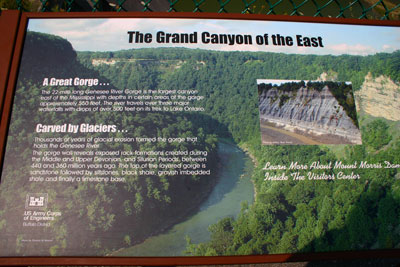 At that location, no one was “fighting upon the banks” or baptizing in it. The next picture is where the Genesee River meets the Sea North, modern-day Lake Ontario. 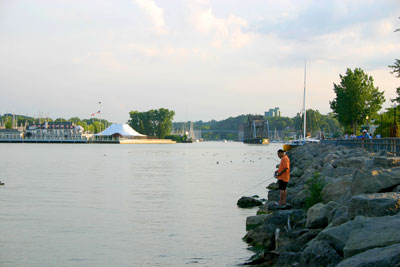 The fact this was their eastern border and not the River Sidon which ran down the “heart” of the Land of Zarahemla is substantiated by the lack of archaeological evidence east of the Genesee River:

The evidences of mound culture are more numerous in extreme western New York than east of the Genesee river (William A. Ritchie, Pre-Iroquoian Occupations of New York, 1944, p. 9).

Sorenson had this to say regarding the length of the Sea East in the Land Southward:

In summary, the mileages measured along the coast are as follows:

Suppose we now arbitrarily allow an additional twenty miles for the distance between Omner and Lehi, for which we do not have a specific basis for measurement, another ten miles from Bountiful to the “line” that separated the lands Bountiful and Desolation, and finally, five miles from Moroni city to the edge (“line”) of Nephite-controlled land.

Adding the numbers together we conclude that the southward limit of Nephite possessions along the east sea was only about eighty miles from the land northward (John L. Sorenson, Mormon’s Map, FARMS, 2000, pp. 67-68).

Actually, the total distance is way less because:

a. The City Bountiful was on the west side. – 12 miles

c. The City Bountiful was on the line that separated the lands Bountiful and Desolation. -10 miles

d. The City Moroni was on the edge (“line”) of Nephite-controlled land. -5 miles

During Book of Mormon times, Lake Tonawanda (Sea South/Sea that Divides the Land) was significantly larger because water was flowing into it from Lake Erie. The ancient lake had several outlets on the north, south, and east. Its southward flow ran south along Book of Mormon lands and was the East Sea.

The flash flood type event destroyed many of the cities near or adjacent to the East Sea—just as the prophecies said. This southward water flow for the Sea East for just that stretch was noted by Frank Leverett:

It is a matter of much significance that these pitted gravel plains appear at levels far below the level of Lake Warren and in positions where it would seem probable that the lake had free access to the ice margin. Those near Oakfield are fully 100 feet below the level of the neighboring part of the beach of Lake Warren, while those along the border of Aliens Creek are 150 to 250 feet or more below the beach. There is a gravel plain just west of Scottsville on the north side of Allens Creek which stands between the 580 and 600 foot contours, or about 275 feet below the beach of Lake Warren. This has been extensively opened for gravel in a direction favorable for showing the mode of formation, there being a pit about one-fourth of a mile long extending from north to south across the gravel plain. The bedding shows that it was built by a stream moving SOUTHWARD away from the ice sheet but up the Genesee Valley. The beds were built out from NORTH TO SOUTH in the form of a DELTA, the topset and foreset beds being well exposed. The dip of the foreset beds is most abrupt in the middle part of the pit, being 25Â° to 30Â° below the horizontal. With the advance of the delta southward the angle of dip decreases to 10Â° or less. The material is a sandy gravel with many stones 2 or 3 inches in diameter. It is, on the whole, finer and less distinctly assorted than in the outwash gravels formed in situations where the water had free escape. If Lake Warren still persisted the material contained in this delta and other gravelly deposits along the southern border of the drumlin belt seems likely to have been forced out by hydrostatic pressure from the edge of the ice sheet into the bordering lake (Frank Leverett, Glacial Formations and Drainage Features of the Erie and Ohio Basins, 1920, p. 694).

The following eagle view is of modern-day Warsaw within the Wyoming Valley , which was the East Sea in the Land Southward. during Book of Mormon times up to the coming of Christ. Directly east of the city of Warsaw is East Aurora which was the City Zarahemla anciently.

The City of Jershon was the furthest North East corner where the Sea South turned and flowed south becoming the Sea East and thus is described as “joining” the south side of the land Bountiful which stretched from the east to the west:

The word “joins” is used but once in the entire Book of Mormon and is describing a unique land feature that was only found in one place—NE corner of the Land Southward where the Seas South and East met.

See Jershon for those details.