In the late 1800s, visionary citizens brought Olmsted to Buffalo. It was here that Olmsted, inspired by Joseph Ellicott’s radial street layout, designed his first system of parks and parkways, and proclaimed Buffalo to be “the best designed city in the country, if not the world.” During the 1901 Pan American Exposition, Buffalo was celebrated not only as the City of Light, but the City of Trees.1

Another city prominently mentioned in The Book of Mormon is the City of Bountiful which was located in the Land Bountiful. It (the land not the city) was a place you had to pass to gain access to the Land Northward.

The following verses describe the relationship between the City of Bountiful and the City of Zarahemla:

22 And now when Coriantumr saw that he was in possession of the city of Zarahemla, and saw that the Nephites had fled before them, and were slain, and were taken, and were cast into prison, and that he had obtained the possession of the strongest hold in all the land, his heart took courage insomuch that he was about to go forth against all the land.
23 And now he did not tarry in the land of Zarahemla but he did march forth with a large army even towards the city of Bountiful for it was his determination to go forth and cut his way through with the sword that he might obtain the north parts of the land. [Land Northward]
24 And, supposing that their greatest strength was in the center of the land, therefore he did march forth, giving them no time to assemble themselves together save it were in small bodies; and in this manner they did fall upon them and cut them down to the earth. (Helaman 1:22-23)

The “center of the land” was bounded by two forks of the River Sidon. From the City of Zarahemla/East Aurora, one would travel along these rivers, or in between them following their natural course until reaching the West Sea. This is how the Native Americans did it, this is how the Lamanites and Nephites also did it.

The fact that this was a major crossing point for travelers was indicated by the route Nephi and Lehi first took for their missionary journey. After leaving the City of Zarahemla it says they first went to the City of Bountiful:

14 And they did remember his words and therefore they went forth keeping the commandments of God, to teach the word of God among all the people of Nephi beginning at the city Bountiful; (Helaman 5:14)

**Geographers must explain why they went to the City of Bountiful and not Nephihah, Lehi, Morianton, Omner, Gid, or Mulek first.**

This was the natural direction people would take following the river north (possibly in canoes, though none are ever mentioned). They would come to the Land of Bountiful and continue north through the Narrow Passage (possibly stopping at the City Bountiful) or travel east over to the Sea East (Wyoming Valley area). 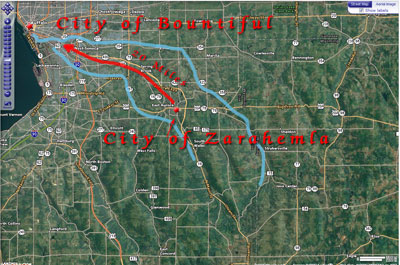 There is an ancient city near the modern day City of Buffalo (see Bountiful Archaeology).

The fact that they did journey between the cities of Gid and Bountiful only means they were in line with each other, not that they were next to each other. The following verse shows that their lands were not immediately adjacent to one another like the other cities: