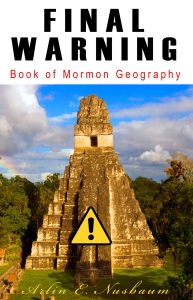 The Book of Mormon Archaeological Forum (BMAF) is a 501(c)3 not for profit organization dedicated as an open forum for presentation, dissemination, and discussion of research and evidences regarding Book of Mormon archaeology, anthropology, geography and culture within a Mesoamerican context. Our goals are (1) to increase understanding of the Book of Mormon as an ancient Mesoamerican text, (2) to correlate and publish works of LDS scholars, (3) to help promote unity and cooperation, and (4) to provide humanitarian, educational and employment opportunities for the people of Mesoamerica.

The largest challenge facing these folks is that their models are all “land prophecy deficient.” That is to say, their focus upon “culture, a writing system, or calendar system,” etc. are not land related and can be found anywhere. Take the work of R. A. Olsen for example. His “Malay Theory” has more “hits” than all above modelers combined. and yet his model is in the Islamic state of Malaysia!

Without land prophecies, you could have your ladder against the wrong tree and not know it!

Books claiming to be about the “geography” of the Book of Mormon should stick to the geography. Books touting this, that, and the other about culture should entitle their books and their field of study “anthropology.”

People become absorbed by other people and their cultures. People migrate, become annihilated, and so on. In other words, cultures are not land based and any person touting culture as the way to identify a land mass are putting the cart before the horse and should stop.

Plus the following from a 2003 snapshot:

Book of Mormon Archaeological Foundation
Board of Directors

The following is a snapshot from one of their tours:

Please note that it is possible to join the 15-day deluxe tours for just the first or just the second week. The one week options usually are approximately $1995 (including airfare) depending on when you join and leave the group. Please call the office for details: 888-226-5205.

Unless otherwise noted the above prices include a round-trip airfare allowance of $500.

This snapshot from 2005 includes General Authorities:

Research and Education Board:

Officers and Board of Trustees

It becomes apparent that the Book of Mormon has been a big money maker for many of these individuals, who are heavily invested in Mesoamerica with their books, maps, lectures, tapes, conferences and tours. We dedicate a few pages to correcting their errors.

[Source for all pages: BMAF]