The following is a good description of the Land Northward*:

3 And it came to pass in the forty and sixth year there was much contention and many dissensions; in the which there were an exceedingly great many who departed out of the land of Zarahemla, and went forth unto the land northward to inherit the land.
4 And they did travel to an exceedingly great distance, insomuch that they came to large bodies of water and many rivers.
5 Yea, and even they did spread forth into all parts of the land, into whatever parts it had not been rendered desolate and without timber, because of the many inhabitants who had before inherited the land.
6 And now no part of the land was desolate, save it were for timber; but because of the greatness of the destruction of the people who had before inhabited the land it was called desolate.
7 And there being but little timber upon the face of the land, nevertheless the people who went forth became exceedingly expert in the working of cement; therefore they did build houses of cement, in the which they did dwell.
8 And it came to pass that they did multiply and spread, and did go forth from the land southward to the land northward, and did spread insomuch that they began to cover the face of the whole earth,from the sea south to the sea north, from the sea west to the sea east.
9 And the people who were in the land northward did dwell in tents, and in houses of cement, and they did suffer whatsoever tree should spring up upon the face of the land that it should grow up, that in time they might have timber to build their houses, yea, their cities, and their temples, and their synagogues, and their sanctuaries, and all manner of their buildings.
10 And it came to pass as timber was exceedingly scarce in the land northward, they did send forth much by the way of shipping.
11 And thus they did enable the people in the land northward that they might build many cities, both of wood and of cement.
12 And it came to pass that there were many of the people of Ammon, who were Lamanites by birth, did also go forth into this land.
13 And now there are many records kept of the proceedings of this people, by many of this people, which are particular and very large, concerning them. (Helaman 3:3-13)

In verse four, it describes “large bodies of water” – which were the seas; and “many rivers.” The Sea North was of course Lake Ontario. The Sea West – Lake Erie extending through the Niagara Gorge. The Sea South is ancient Lake Tonawanda, and the Sea East is the Genesee River/Gorge.

If you travel east across this land from the Niagara Gorge, you will notice this land is elevated above Lake Ontario with a slight downward tilt toward the lake. The view is continually spectacular. The land is flat for over half of its expanse and is fed by multiple streams and rivers that provide its inhabitants with a natural, gravity fed, irrigation system. All of which was great for farming.

Today, much of the land is covered with vineyards, fruit trees, corn and wheat fields, just as it was back then. It is no wonder the Nephites did all that they could to protect this land. Mature vineyards and orchards take time to establish, and once established, they can easily produce food for years.

In fact, the scriptures say that the first inhabitants – the Jaredites – did till the soil right away:

Later on it says that they preserved the Land Southward for hunting:

19 And it came to pass that Lib also did that which was good in the sight of the Lord. And in the days of Lib the poisonous serpents were destroyed. Wherefore they did go into the land southward, to hunt food for the people of the land, for the land was covered with animals of the forest. And Lib also himself became a great hunter.
20 And they built a great city by the narrow neck of land, by the place where the sea divides the land.
21 And they did preserve the land southward for a wilderness, to get game. And the whole face of the land northward was covered with inhabitants.
25 And they did make all manner of tools to till the earth, both to plow and to sow, to reap and to hoe, and also to thrash.
26 And they did make all manner of tools with which they did work their beasts. (Ether 10:19-26)

We should note that they inhabited the western part of the Land Northward which was bordered by the West Sea or current day Lake Erie & Niagara Gorge along which the Narrow Neck ran. This is important for understanding which direction their battles took place -> eastward and northward.

It says they had not time to bury their dead and the stench drove them further and further eastward:

The furthest point they could have fought on the east was the Genesee Gorge (East Sea); and on the north Lake Ontario (Waters of Ripliancum). From there it says they battled southward to the place where the prophet Ether was hiding – Ramah:

A common misunderstanding is that the final Jaredite battle occurred at the Hill Cumorah or “where my father Mormon did hide up the records” (verse 11 above). That’s not what it says. Mormon identified the hill (verse 11) as “Ramah,” and if it was the “Hill Cumorah” he would have identified it as such. The same holds true for the account of Omer:

Omer departed out of the land with his family and traveled many days and came over and passed by the hill of Shim and came over by the place where the Nephites were destroyed and from thence eastward and came to a place which was called Ablom (Ether 9:3)

Note, he did not say “where the Jaredites were destroyed,” nor did he refer to it as “Ramah.” This was the second opportunity for Moroni to identify it as Ramah; plus every time the word “Cumorah” was used, and yet the word “Ramah” only occurs once!

It’s important to understand that Mormon only hid the records “entrusted to him” at Cumorah; all others where hid at the Hill Ramah—the true place of the Jaredite battle:

6 And it came to pass that when we had gathered in all our people in one to the land of Cumorah, behold I, Mormon, began to be old; and knowing it to be the last struggle of my people, and having been commanded of the Lord that I should not suffer the records which had been handed down by our fathers, which were sacred, to fall into the hands of the Lamanites, (for the Lamanites would destroy them) therefore I made this record out of the plates of Nephi, and hid up in the hill Cumorah all the records which had been entrusted to me by the hand of the Lord, save it were these few plates which I gave unto my son Moroni. (Mormon 6: 6)

It is clear we know almost nothing of these people in the Land Northward and their records were stored somewhere else, i.e., those not entrusted to Mormon—in Ramah.

Where Was the Hill Ramah?

If you travel south from Lake Ontario (Sea North) along the Genesse Gorge (West Sea), there is one very prominent hill where Ether could have safely watched undetected – Highland Park in Rochester. It is located on the eastern side of the Genesee River.

Being on the east side of the East Sea, the hill was not used by troops, but was a perfect place for Ether to hide, observe, and to store records. It was also the place where Mormon stored records, and the place where Moroni later found additional plates to write on.

Therefore, the final Jaredite battle occurred around Rochester not Palmyra. 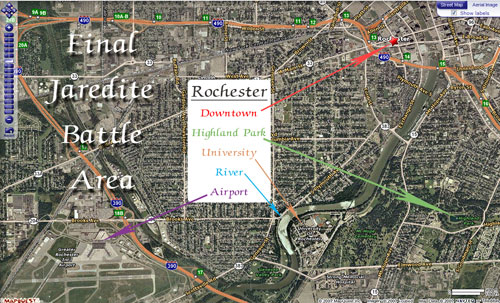 In one section of the Genesee Valley, just south of Rochester, hardly a knoll is opened without revealing skeletons (William A. Ritchie, “Culture Influences from Ohio in New York Archaeology,” American Antiquity, Vol. 2, No. 3, Jan., 1937, pp. 182-194). 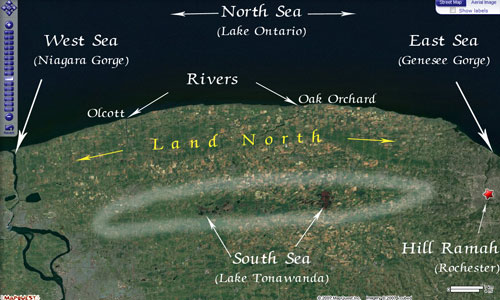 Other notable characteristics regarding the Land Northward are:

*For advanced researchers, do not confuse this main “Land Northward” with that mentioned in Alma 22:29.