While Brandley, Meldrum, May and others want to glorify how broad of a reach the inhabitants of their models had, that fact actually refutes their models.

3. The Mississippi was a people, land, and animal barrier, which the River Sidon was not: River Sidon

4. There were TWO River’s Sidon, or one river with two branches: Two Sidons

The following response shows the warped approach Brandley has used to establish his model:

Theodore said: The best evidence for the correct interpretation of the phrase, “head of the river Sidon” is to test its validity on the map of America. This is what my thesis is all about—testing this theory to see if it works—and it does.

The first thing I did after coming up with the theory of Sidon Head was to search for a substantial archaeological site on the west side of the Mississippi within 200-300 miles of the Gulf. Bingo! There it was! The marvelous site at Poverty Point that still has a 50 foot tower at the west end of the temple mound. This process went on and on. Every time I looked for a site or a landmark described in the text, there it was.

Rather than base you opinion of the theory on the perceived meaning of the word “head,” I would suggest that you test the theory by checking the text against the facts on the ground as I have in the thesis. 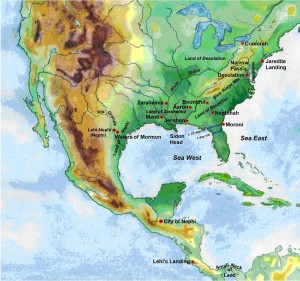 Theodore’s premise (That it covered most of N. America) is stated in this opening paragraph:

Moroni, who was certainly in a position to know the facts, was speaking to Joseph Smith in New York State when he said that the Nephites were “the former inhabitants of this continent.” It would have been misleading and deceptive of Moroni if he had only meant some small distant corner of the continent. (Emphasis his.)

He then cites different scriptural accounts that in his mind are proof of large distances:

As for the time it took the Nephites to travel long distances, there are only four references stating the number of days of travel from one point to another in the Promised Land. When these locations are understood the distances are reasonable and none of them preclude a continent wide settlement. In fact, many statements in the Book of Mormon require such distances.

It took the Nephite Captain, Moroni, the most part of a year to move a portion of his army through friendly territory from Zarahemla to Bountiful. This makes no sense if the distance was only two or three hundred miles (300-500 km) across Mesoamerica. An army could march that in ten days. Later, Helaman, an officer of Moroni’s army, wrote a lengthy epistle from the war theatre near the west sea to Captain Moroni near the east sea. Helaman’s epistle described the battle situation over a period of four years. If the distance between them had only been two or three hundred miles (300-500 km), runners could have kept them in regular communication. The fact that these military officers only communicated about the conduct of the war once in those four years is further evidence that there was a great distance between them.

Helaman, son of Helaman, described how a great many people, about fifty years before the birth of Christ, migrated from Zarahemla to the land northward. He states that, “They did travel to an exceedingly great distance, insomuch that they came to large bodies of water and many rivers” (emphasis his). To the Nephites, who had a recorded heritage of long-distance travel, an exceedingly great distance would surely be more than a few hundred miles.

Mormon wrote that in AD 375, “from this time forth did the Nephites gain no power over the Lamanites, but began to be swept off by them even as dew before the sun.” This final rout lasted ten years and culminated at Cumorah in AD 385. A military rout lasting ten years speaks of a vast territory. A similar situation occurred previously amongst the Jaredites. When the armies of Coriantumr and Shiz faced off at Ramah (Cumorah) for their final battle, they paused in their fighting to gather their survivors. It took them four years to gather their people for battle, indicating a very large territory from which they were gathered.

The Nephites and the Jaredites coexisted on this continent for 400 years without contact. That would be highly improbable in an area the size of Mesoamerica.

The Angel Moroni’s statement to Joseph Smith, that the Nephites were the former inhabitants of the North American Continent, is substantiated throughout the pages of The Book Of Mormon. As will be demonstrated in these pages, the text of The Book Of Mormon is accurate and exact in setting its geography throughout the North American Continent. (pp 1-2)

Though we have already addressed the myth of large distances throughout our site, this reply to Theodore by Greg Smith shows us he is unwilling to be persuaded from his opinions:

Theodore said: Many statements in the Book of Mormon require great distances.

“Require”? Are you sure? Many others have read it differently. Again, you need to quantify what YOU mean when you say “great”—is it 100 miles? 1000 miles? 10 miles?

Theodore said: It took the Nephite Captain, Moroni, the most part of a year to move a portion of his army through friendly territory from Zarahemla to Bountiful (Alma 52:11, 15, 18). This makes no sense if the distance was only two or three hundred miles. An army could march that in ten days.

You’re presuming that the army is mustered and ready to go, and that there’s nothing to do besides march. But, let’s consider some other factors before we conclude that this is how we must read the text:

* premodern societies rarely had standing armies. The troops were farmers/peasants or what have you. Such people had to be rallied, convinced to assemble and fight, equipped, provisioned, arrangements made to secure homes and families from attack (otherwise they’re less likely to want to leave to go fight), etc. That’s before they set out.

* the text is also clear that part of Mormon’s defensive strategy involved fortification, “defense in depth,” if you will, etc. This means that it may not be the case that he did nothing but march men from point A to point B. There may have been other aspects of this which he felt important. We aren’t told.

* the speed of movement over any terrain is greatly dependant on the terrain itself. What would be easy over a coastal plain, for example, might be much longer over mountainous terrain, for example. In some regions, even a few miles could take months.

The most clear discussion of distances and travel times is in the Alma/Limhite refugees in Mosiah, as Sorenson has emphasized. There we have specific times, and it’s pretty clear people aren’t doing anything except fleeing/traveling. You might try making your case based on a critique of Sorenson on that point.

Theodore said: If the distance between them had only been two or three hundred miles, runners could have kept them in regular communication. The fact that these military officers only communicated about the conduct of the war once in those four years is further evidence that there was a great distance between them.

It’s _possibly_ evidence of that. But, it’s also potentially evidence for other things, such as:

* the terrain was so difficult that message turn-around time would have had little benefit for anyone—Moroni has to trust his generals on the ground; he can’t micro-manage the ward from the eastern campaign.

* the tactical situation was such that the risks of getting runners through “enemy territory” was not worth it.

* Zarahemla was closer to Helaman than Moroni was; thus, it would make little sense for Helaman to write to Moroni (who was further away, and needed his own troops and supplies) when he can write to Zarahemla for reinforcements and reprovisioning? (Indeed, Helaman’s letter to Moroni is precipitated in part by the fact that he ISN’T getting the replies or help he needs from Zarahemla.)

It _may_ speak of a vast territory. Again, terrain counts for a lot. We are deceived, sometimes I think, by the pace of modern mechanized warfare. What is rapid to a premodern culture may strike us as rather slow-paced.

Theodore said: It took them four years to gather their people for battle (Ether 15:14), indicating a very large territory from which they were gathered.

Again, you’re presuming, I think, that gathering the people required nothing else than sending out a call. How do you provision these people? How do you equip them? The land had been at war for years; agriculture was human-powered, labor intensive, and nowhere near our modern yields.

Theodore said: So when Mormon wrote, “They did travel to an exceedingly great distance, insomuch that they came to large bodies of water and many rivers” (Helaman 3:3-4), he knew that the Nephites had a recorded heritage of long-distance travel and were covering distances more than a few hundred miles.

They had ONE long-distance immigration that was unique and extraordinary. What does Mormon tell us elsewhere about journeys? Again, I’d like to see your map—what dimensions are we talking here? 500 miles? 50 miles? 5000 miles? We need to define our terms, because what I think is exceedingly long may not match YOUR exceedingly (much less the Nephites’!)

NO SEA NORTH, SOUTH OR RIPLIANCUM

8 And it came to pass that he came to the waters of Ripliancum, which, by interpretation, is large, or to exceed all; wherefore, when they came to these waters they pitched their tents; and Shiz also pitched his tents near unto them; and therefore on the morrow they did come to battle. (Ether 15:8)

We then did a word search for these three BoM bodies of water and only found Ether 15:8 mentioned once, without any mention of where ANY of these bodies of water fit into his model. According to the Geographical Priority Index Geographical Priority Index – GPI, he should have located those before claiming the whereabouts of cities or anything else.

The largest single BoMG feature IS Ripliancum – the Sea North. If that has no place in your model, then you don’t have a model worth pursuing. But that’s not all, you must show a “Sea South” ALSO, which he failed to do, not to mention the Seas East and West of the Land Northward.

Outside of Western New York, you cannot find a “Land Northward” completely surrounded by FOUR bodies of water, and a “Land Southward” surrounded by THREE – one of the north, west, and east – NOT the south. We are calling this phenomenon of forgetting to place the Sea’s North, South, East and West the “Helamn 3:8 Syndrome.”