“From all the evidence in the Book of Mormon, augmented by the testimony of the Prophet Joseph Smith, these final battles took place in the territory known as the United States, and in the neighborhood of the Great Lakes, and hills of Western New York” (President Joseph Fielding Smith, Jr.).

“It has long been known that many evidences of ancient labor and skill are to be found in the western parts of New York and Pennsylvania, upon the upper tributaries of the Ohio, and along the shores of Lakes Erie and Ontario. Here we find a series of ancient earth-works, entrenched hills, and occasional mounds, or tumuli, concerning which history is mute, and the origin of which has been regarded as involved in impenetrable mystery. These remains became a subject of frequent remark, as the tide of emigration flowed westward; and various detached notices of their existence were, from time to time, made public” (E. G. Squier, Aboriginal Monuments of the State of New York, Smithsonian, 1849, pp. 9-10).

The true Book of Mormon lands are in Western New York between Palmyra and Erie, PA. Evidence of the ancient inhabitants have been documented in the following volumes:

The promise that Book of Mormon lands would become overrun once God’s people were gone was fulfilled:

“In the course of its long and eventful prehistory, the territory embraced in the present state of New York was invaded from nearly every direction. For several groups, notably the Iroquois, it was the end of the trail; others sojourned briefly and passed on. In part it was heavily occupied by diverse bands for a considerable period of time” (William A. Ritchie, “Culture Influences from Ohio in New York Archaeology,” American Antiquity, Vol. 2, No. 3 (Jan., 1937), pp. 182-194).

“Interest in the prehistorical background of the Empire state seems first to have been voiced by the versatile and prescient De Witt Clinton in a brief paper on the earth works of western New York, read before the Literary and Philosophical Society of New York, in 1817, in an attempt, as he said, ‘to awaken the public mind to a subject of great importance before the means of investigation were entirely lost’ (fn. Clinton 1818).

“His cry in the wilderness passed unheard, however, for when E. G. Squier, in 1848, made an earthwork survey of northern, central, and western New York under the joint auspices of the Smithsonian Institution and the New York Historical Society, he found all save one of the then known and relatively rare sepulchral mounds already looted by treasure seekers, and many of the earth-walled fortifications partially or completely obliterated by the plow” (fn. Squier, 1851, pp. 11, 97) (William A. Ritchie, Pre-Iroquoian Occupations of New York, 1944, p. 2).

Not to mention that a fire broke out in the New York State Capital on March 29, 1911 destroying a hundred years worth of collected Indian relics:

“NEW YORK State’s magnificent $26,000,000 capitol building, recognized the country over as one of the masterpieces of architecture, had its western section completely fire swept on the morning of March twenty-ninth [1911], entailing a loss estimated by the State Architect at $5,000,000; practically destroying the State library with the most complete law library in the country, and destroying a tremendously valuable collection of books and ancillary collections of manuscripts and priceless historic relics, which it took one hundred years to collect with an unlimited supply of money, in addition to costing one human life” (Albany Evening Journal, March 29, 1911 cit. “Sparks” from the New York state capitol fire, Albany, N.Y., March 29, 1911, Coulson & Wendt, Albany, 1911, p. 6). 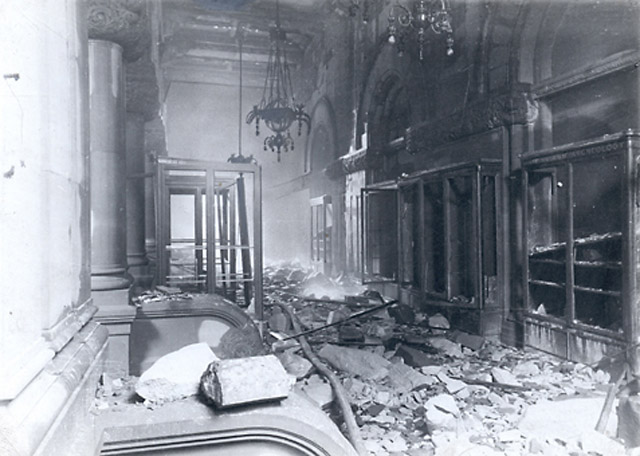 “On March 29, 1911, fire broke out in the Capitol. From the Assembly Library, it spread to the State Library near the museum displays. Flame, water, and breakage due to collapse of the sandstone ceiling brought almost total destruction to the collections on exhibit. Of 10,000 archaeological artifacts and ethnographic objects, only about 1500 were recovered, most of which were damaged. A mere 512 retained identifiable catalog numbers.

“Approximately 50 of the Morgan Collection items fortunately had been removed to the curator’s office for study before the fire. Most of the remaining 450 were damaged or destroyed. Even if not completely consumed by fire, many objects lost their identifying labels” (The New York State Capitol Fire).

These are some of the items that have been located: [link]

The following prophecies were fulfilled on these lands: [link]

The following Book of Mormon locations have been identified:

Aside from matching those items, we have also identified cement houses, poisonous serpents, elephants, where the Jaredites and Mulekites landed and lived, where they sent forth ships for timber; where Ether and Moroni lived safely undetected for years; and the place our Lord first descended in glory.