9 And it came to pass that when Moroni had driven all the Lamanites out of the east wilderness, which was north of the lands of their own possessions, he caused that the inhabitants who were in the land of Zarahemla and in the land round about should go forth into the east wilderness, even to the borders by the seashore, and possess the land.
10 And he also placed armies on the south, in the borders of their possessions, and caused them to erect fortifications that they might secure their armies and their people from the hands of their enemies.
11 And thus he cut off all the strongholds of the Lamanites in the east wilderness, yea, and also on the west, fortifying the line between the Nephites and the Lamanites between the land of Zarahemla and the land of Nephi from the west sea running by the head of the river Sidon—the Nephites possessing all the land northward yea even all the land which was northward of the land Bountiful according to their pleasure.
12 Thus Moroni, with his armies, which did increase daily because of the assurance of protection which his works did bring forth unto them, did seek to cut off the strength and the power of the Lamanites from off the lands of their possessions, that they should have no power upon the lands of their possession.
13 And it came to pass that the Nephites began the foundation of a city, and they called the name of the city Moroni; and it was by the east sea; and it was on the south by the line of the possessions of the Lamanites. (Alma 50)

There should be a distinct line running east and west south of the River Sidon that divided the Lamanites from the Nephites. And there is – Cattaraugus Creek, which is also the current day dividing line between Erie County and Cattaraugus County. 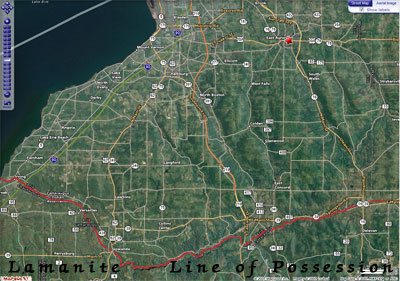 Modelers are at a loss to explain the chance encounter of Alma and the Sons of Mosiah in Manti by the river’s head:

And now it came to pass that as Alma was journeying from the land of Gideon southward, away to the land of Manti, behold, to his astonishment, he met with the sons of Mosiah journeying towards the land of Zarahemla. (Alma 17:1)

Modelers must explain the wisdom in the route coming from the Land of Nephi to Zarahemla through Manti. As can be seen on the following map, the route followed the Lamanite Line of Possession or Cattaraugus Creek which flows east to west across Book of Mormon lands. The genius is the location of its head being close to the head of the Buffalo Creek / River Sidon in Manti / Java Lake.