Mormon said that the City of Bountiful forever remained one of the most secured cities (Alma 53:5).

3 And it came to pass that after the Lamanites had finished burying their dead and also the dead of the Nephites, they were marched back into the land Bountiful; and Teancum, by the orders of Moroni, caused that they should commence laboring in digging a ditch round about the land, or the city, Bountiful.
4 And he caused that they should build a breastwork of timbers upon the inner bank of the ditch; and they cast up dirt out of the ditch against the breastwork of timbers; and thus they did cause the Lamanites to labor until they had encircled the city of Bountiful round about with a strong wall of timbers and earth, to an exceeding height.
5 And this city became an exceeding stronghold ever after;  (Alma 53)

This rectangle contained 83,557 acres of land, the most fertile and most delightful of all the lands of Erie County. The Buffalo Creek Reservation was in general a flat plain tilted upward to the east. At its western end where it abutted upon the lake, its altitude was 573 feet, but eastwardly it rose gradually to the flat plains about Marilla until it attained a height of 325 feet above Lake Erie. This tilted plain is dissected by Buffalo Creek and by its main branches, Casenovia Creek and Cayuga Creek. Its southern portion is cut by Smoke’s Creek which enters it on its southern edge and continues in it to its mouth. The topography of the Reservation was partly decided by the rock formations underlying it (Buffalo Creek Reservation, Buffalo Historical Society Publications, Vol. 24, 1920, p. 6). 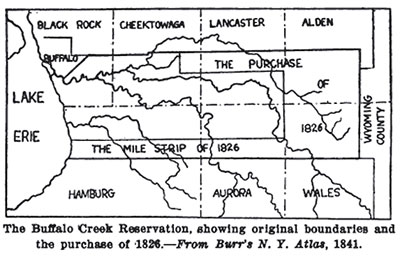 “To one interested in the peoples of past and gone times and their culture, the Buffalo Creek Valley offers in its archaeology a very interesting and varied field. All over its surface are to be found vestiges of an ancient and pre-historic people. Every sandy knoll, every creek terrace, will yield to the searcher its crude points of chert or its bits of pottery, showing that here abode some pre-historic Stone Age savage. While, as will be told later, some of these vestiges may be traced and attributed definitely to some distinct peoples, the identity of the users of many of them can never be known.

“Although there are scattered over the surface of the reservation a vast number of artifacts of different kinds, and though any patient search over nearly any field on the reservation will yield a few flint points, there are certain restricted areas which yield, and have yielded for years, hundreds and even thousands of weapons, tools and utensils made and left there by the pre-historic occupants of the region…and a few areas are still known to have been SURROUNDED BY EARTHEN WALLS. These areas mark the site of large communities, all of which are well known locally as ‘Indian forts’ or ‘Indian villages’ and most have been searched by collectors for nearly a century” (p. 13).

“The site now known as Seneca Indian Park was formerly known locally as the ‘Old Indian Burying Ground’. During the Seneca occupation of the Reservation the site of the ancient pre-historic village was used by them as a cemetery and in it most of their prominent people were buried…It occupies a sandy terrace which conceals from view an outcrop of Stafford limestone.

“The area of the ancient village embraced the present Seneca Indian Park and extends northward beyond it. The entire area when first known was SURROUNDED BY AN EARTHEN WALL“ (p. 17).

“Besides these abundant artifacts derived from the refuse, the surface of this site yields numerous notched points indicative of an occupation by some other, and non-Iroquoian, people” (p. 21).

Thus we see that there is archaeological evidence to support the fact that there was a large community there anciently, with multiple forts, and an earthen wall surrounding them.