The name of the indigenous peoples inhabiting Book of Mormon lands prior to the arrival of Lehi or Mulek is “Lamanite by Birth”; however, not all Lamanites were Lamanites by Birth:

13 Now the people which were not Lamanites [Lamanites by birth] were Nephites nevertheless they were called: Nephites, Jacobites, Josephites, Zoramites, Lamanites, Lemuelites, and Ishmaelites. (Jacob 1)

Most often, the “Lamanite” term is used as a designation for the non-believer, the rebellious, defiant, or lazy warring types who plagued the believers or “Nephites”:

The Book of Mormon is clear there were many tribal, family, or clan names, but to simplify the matter, the writers chose the name “Lamanite” to identify all non-believers, and “Nephite” for all believers.

Amalickiah who was a Nephite by birth (Alma 49:25)

people of Ammon who were Lamanites by birth (Helaman 3:12)

The reduction to a two-party state caused some readers to assume there were no pre-existing peoples and that all non-believers, i.e. “Lamanites” descended from the originator of the namesake – Laman. Thus, the Mormon Church was comfortable with the supposition that ALL inhabitants of Book of Mormon lands descended from Lehi, the father of Laman and Nephi.

By miscalculating the size of Book of Mormon lands, Joseph Smith and others incorrectly claimed that the entire American Hemisphere was Book of Mormon land. Thus, all American Indians were considered to be “Lamanites” who descended from Lehi or Mulek. Such a view was skewed and modern scholars now recognize that it cannot be supported by DNA or population patterns (see the Deseret News article “Change in Book of Mormon Introduction“). 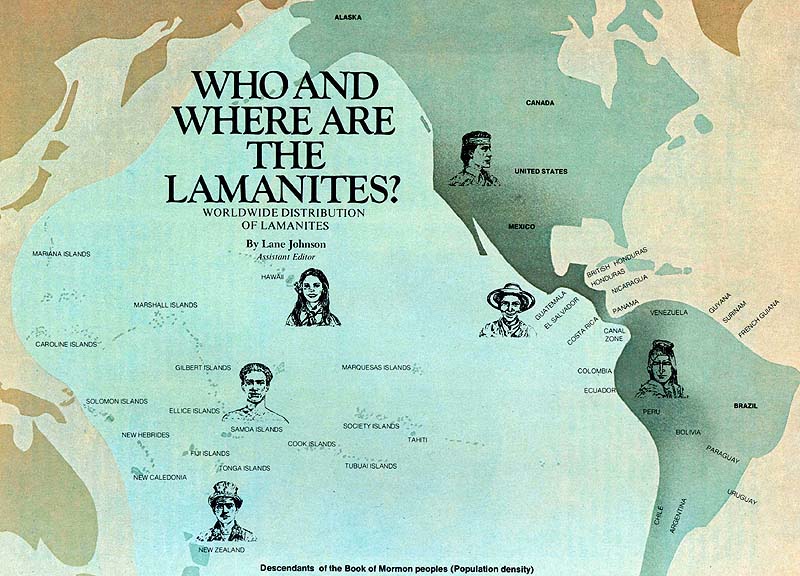 The correct view is less egocentric and counter to the stereotypes. The following points will correct the errors:

1. Book of Mormon land was hidden

2. Book of Mormon land had borders

3. Book of Mormon land was smaller than Bible land

4. Lamanites inhabited areas outside of Book of Mormon land

5. Lamanites were greater in number than the Nephites

6. Not all Lamanites were slothful, or disorganized

7. Lamanite lands were not hidden

The fields of archaeology and anthropology must show that the Nephites were a sub-group of a larger, pre-existing culture. Whatever their cultural differences were must be reflected in the archaeological record. If the predominant culture group and archaeological remains are presumed to be Nephite, that modeler and his or her model is wrong.

There should exist a population, whose archaeological remains interweave with a culture that existed prior to them and after them. The smaller Nephite culture would appear on the radar as anomalies more than anything. Just like their DNA became diluted, so too did their culture in the archaeological record.

“Two major vegetative features attributed to aboriginal and pre‑colonial activities at Artpark involve firstly the presence of the ancestor of our Bing Cherry, Prunus avium L., or “Bird‑Cherry” due to its major vector of seed dispersal. This European species is everywhere throughout areas up and downstream of the cataracts” (P. M. Eckel, Artpark, Lewiston, New York: Botanical field notes from 2001 and 2002).

Did the Lamanites build mounds? Yes

To study the Mound Builders is to study the non-stereotype Lamanites as described above. This study should become a discipline in and of itself. After a mere 55 years after Lehi landed near Erie, PA, a man by the name of Sherem came in among the people:

1 And now it came to pass after some years had passed away there came a man among the people of Nephi whose name was Sherem. (Jacob 7)

Jacob says he was knowledgeable and knew their language and tried to persuade their beliefs:

4 And he was learned that he had a perfect knowledge of the language of the people wherefore he could use much flattery and much power of speech according to the power of the devil. (Jacob 7)

After Jacob confounded this man and his teachings, Sherem confessed the error of his ways to “a multitude.” Where did this multitude come from? Lehi’s family did not produce them after a mere 55 years their cousins were known.

17 And it came to pass that on the morrow the multitude were gathered together and he spake plainly unto them and denied the things which he had taught them and confessed the Christ and the power of the Holy Ghost and the ministering of angels. (Jacob 7)

It was also during this time that Jacob spoke out against polygamy. How could that come about unless there were more women? No doubt the locals were fascinated by these white men and would have been easy to take advantage of:

Obviously there was a greater indigenous population compared to the Nephite population. This is what Jarom said:

6 And they were scattered upon much of the face of the land and the Lamanites also and they were exceeding more numerous than were they of the Nephites. (Jarom 1)

In fact, later when the Nephites moved to the city of Zarahemla and joined with their numbers, together, they were not half as numerous as the others:

Jacob also said that wars had already occurred, and that they had armies their numbers were so great.

24 And it came to pass that many means were devised to reclaim and restore the Lamanites to the knowledge of the truth; but it all was vain, for they delighted in wars and bloodshed, and they had an eternal hatred against us, their brethren. And they sought by the power of their arms to destroy us continually.
25 Wherefore, the people of Nephi did fortify against them with their arms, and with all their might, trusting in the God and rock of their salvation; wherefore, they became as yet, conquerors of their enemies. (Jacob 7)

1 And it came to pass that after two days and two nights they were about to take his body and lay it in a SEPULCHRE which they had made for the purpose of burying their dead. (Alma 19)

“The purposes of the mounds of New York, so far as can be determined, seem uniformly to have been those of SEPULTURE (sic)” (E. G. Squier, Aboriginal Monuments of the State of New York, 1849, p. 67).

“It serves to sustain the conclusion that the savage Indian tribes occasionally constructed mounds; which are however rather to be considered accidents than the results of a general practice” (Ibid.).

[The following account supports our premise that Lamanites were the Mound Builders and were gathered to the final battle.]

“While on our travels we visited many of the mounds which were flung up by the ancient inhabitants of this continent, probably by the Nephites & Lamanites. We visited one of those Mounds and several of the brethren dug into it and took from it the bones of a man. Brother Joseph had a vision respecting the person he said he was a white Lamanite, the curse was taken from him or at least in part, he was killed in battle with an arrow, the arrow was found among his ribs, one of his thigh bones was broken, this was done by a stone flung from a sling in battle years before his death, his name was Zelph. Some of his bones were brought into the camp and the thigh bone which was broken was put into my wagon and I carried it to Missouri. Zelph was a large thick set man and a man of God, he was a warrior under the great prophet that was known from the hill Cumorah to the Rocky mountains. The above knowledge Joseph received in a vision” (Scott Kenney, ed., Wilford Woodruff’s Journal, 1983, 1:10).

[The rudiments of this vision we accept, other enumerations not directly tied to Zelph are open to discussion.]

Lamanites Preserved Book of Mormon Land for the Gentiles

“We fairly owe it, then, to the league of the Iroquois to give credit, not only for their actual efforts on the field of battle, not only for their brave and successful defence of our north-eastern boundary against French assaults, but as well for having conquered and held for Anglo-Saxon civilization, the larger and fairer portion of our country beyond the Alleghanies” (William Adams, ed., Historical Gazetteer and Biographical Memorial of Cattaraugus County, N. Y., Syracuse, N. Y.: Lyman, Horton & Co., 1893, p. 6).

First Mission Among the Lamanites

“Oliver Cowdery and Peter Whitmer had been called to go on a mission to the Lamanites (Sec. 28:8 ; 30:5 ). There was great interest among the Saints in this mission, for it was hoped that the time had come for the redemption of the scattered Remnant, according to the promises in the Book of Mormon (1 Nephi 15:13–18 , and many other places). The Prophet laid the matter before the Lord in prayer and received this Revelation, in which Parley P. Pratt and Ziba Peterson were called to join Oliver Cowdery and Peter Whitmer, Jr., on that important mission” (Smith and Sjodahl, Commentary, p. 169).

“The Lamanite missionaries commenced their work with the Catteraugus tribe near Buffalo, New York.   Here they were fairly well received, and after leaving copies of the Book of Mormon they continued their journey west. They took a slight detour to teach the gospel to a minister friend of Parley P. Pratt and his congregation near Kirtland, Ohio. . . . What must have been thought to be a diversion from their mission turned out to be a major accomplishment” (Doctrine and Covenants Student Manual, 2001).

D&C 32 of the Doctrine and Covenants contains a revelation calling Parley P. Pratt and Ziba Peterson to preach to the Lamanites and accompany Oliver Cowdery and Peter Whitmer Jr. “into the wilderness among the Lamanites.” (v. 2.) In Church History and Modern Revelation, Vol. 1, Elder Joseph Fielding Smith wrote: “From their study of the Book of Mormon, they had become enthusiastic over the [Lord’s promises that a REMNANT upon THIS LAND should receive the truth (“First Missionaries Called To Lamanites,” LDS Church News, 1993, 02/27/93).

“One of the major accomplishments of the mission by Parley P. Pratt and his companions that began Oct. 17, 1830, to preach the gospel to the Lamanites is that it provided their first contact with Kirtland, Ohio, which one day would become headquarters of the Church. After the missionaries spent some time among the Catteraugus tribe near Buffalo, N.Y., they continued their journey west, taking a slight detour to the Kirtland area. What must have been thought to be a diversion from their mission turned out to be a major accomplishment. It was in Kirtland that the missionaries visited one of Elder Pratt’s friends, Sidney Rigdon, a Reformed Baptist minister” (“Great Accomplishment on Detour,” LDS Church News, 1993, 02/27/93).

This is how the Amlicites painted themselves:

4 And the Amlicites were distinguished from the Nephites for they had marked themselves with red in their foreheads after the manner of the Lamanites; nevertheless they had not shorn their heads like unto the Lamanites. (Alma 3)

“Just who the red paint people were is not possible to state definitely. They do not appear to be Algonkian or even Eskimoan. In the Maine localities they are regarded as the most ancient of all the aboriginal inhabitants, antedating the coming of the Algonkian tribes. It has been suggested that the culture is that of the Boethuck.

“We have just enough of the red paint culture in New York to suggest its further study. More than likely, many specimens of its artifacts have erroneously been associated with those of the Algonkian or so-called Eskimoan origin” (Arthur Caswell Parker, The Archeological History of New York, 1922, p. 434).