To arrive at the Promised Lands of Western New York, Duane R. Aston (The Other Side of Cumorah, 2003) did an excellent job connecting the dots. The following research is his.

The traditional view says Lehi traveled by foot to the Arabian Peninsula and a ship then sailed to Chile (or thereabouts). According to Aston however, this poses some problems: 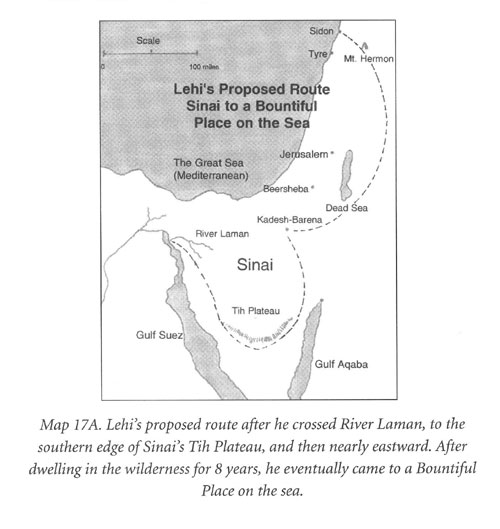 The route taken matches the scriptures, both by way of directions and by the analogy given of the children of Israel:

23 And it came to pass that I, Nephi, spake unto them, saying: Do ye believe that our fathers, who were the children of Israel, would have been led away out of the hands of the Egyptians if they had not hearkened unto the words of the Lord?
24 Yea, do ye suppose that they would have been led out of bondage, if the Lord had not commanded Moses that he should lead them out of bondage?
25 Now ye know that the children of Israel were in bondage; and ye know that they were laden with tasks, which were grievous to be borne; wherefore, ye know that it must needs be a good thing for them, that they should be brought out of bondage.
26 Now ye know that Moses was commanded of the Lord to do that great work; and ye know that by his word the waters of the Red Sea were divided hither and thither, and they passed through on dry ground.
27 But ye know that the Egyptians were drowned in the Red Sea, who were the armies of Pharaoh.
28 And ye also know that they were fed with manna in the wilderness.
29 Yea, and ye also know that Moses, by his word according to the power of God which was in him, smote the rock, and there came forth water, that the children of Israel might quench their thirst.
30 And notwithstanding they being led, the Lord their God, their Redeemer, going before them, leading them by day and giving light unto them by night, and doing all things for them which were expedient for man to receive, they hardened their hearts and blinded their minds, and reviled against Moses and against the true and living God.
31 And it came to pass that according to his word he did destroy them; and according to his word he did lead them; and according to his word he did do all things for them; and there was not any thing done save it were by his word. (1 Nephi 17)

Aston believes they took the same route as the children of Israel through Sinai [traditional or true location works]: 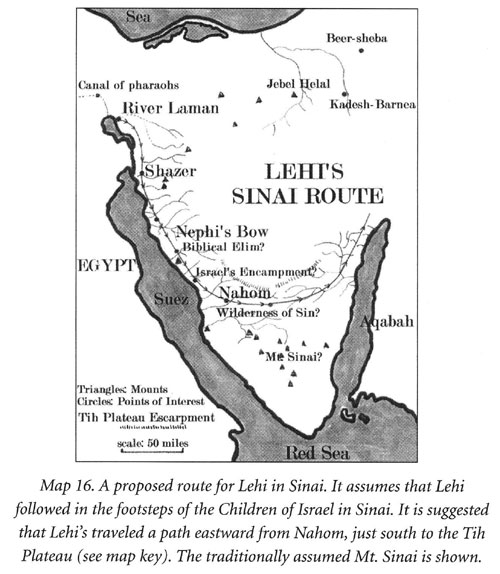 Doesn’t it make sense that God would lead them to the area where the experts of world navigation lived – the Phoenicians?

The following shows the route the Jaredites took: 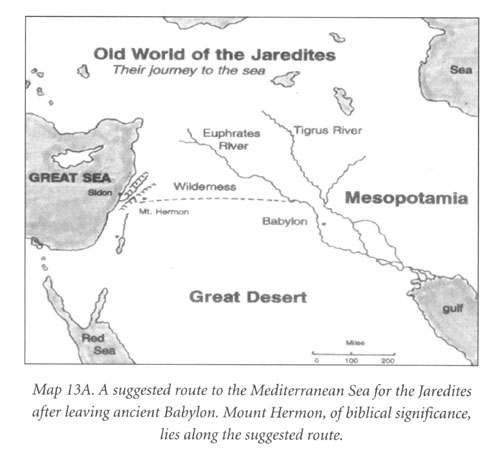 The voyage across the Atlantic was described:

“This country now called NEW NETHERLAND is usually reached in seven or eight weeks from here. The course lies toward the Canary Islands; thence to the Indian Islands, then towards the main land of Virginia, steering right across, leaving in fourteen days the Bahamas on the left, and the Bermudas on the right hand where the winds are variable with which the land is made” (E.B. O’Callaghan, The Documentary History of the State of New York, 1850, p. 19).

A modern recreation involving the Phoenicians was just completed by PHILIP BEALE and crew:

There were no mechanical inventions by Columbus that allowed him to traverse the Atlantic Ocean. It was a paradigm shift, nothing more. See also:

Previous: Lands
Next: Land of Cumorah