If you look for a sea on a map west of Cumorah, the West Sea would have to be Lake Erie. 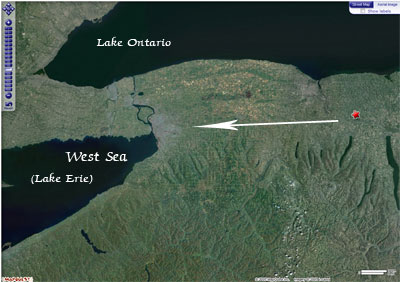 What is important to understand from eye level is that the entire Niagara Gorge which runs from Lake Erie to Lake Ontario is still the West Sea. If you used satellite images only, you would not come to that conclusion. Remember, Mormon documented things the way he saw them – at ground level.

Here are some images of the Niagara Gorge at eye level. This is next to its narrowest stretch. To put the size of the depth and width of the gorge into perspective, across the bank on the top of that ridge is a large building. It is so far away it is hardly discernable: 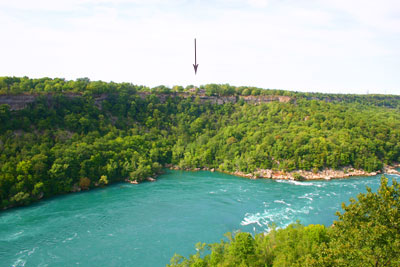 The Niagara Gorge was not like a river you could cross, let alone put a boat in, it was something much bigger, and flowing into and out of large bodies of water, or “seas.” 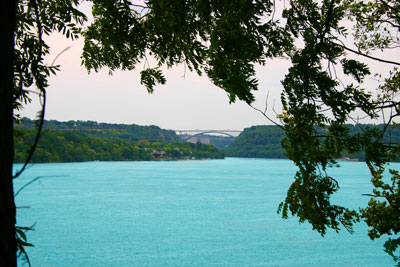 This is the view below that narrow spot. Truly it is wide like a sea. However, it was NOT salt water like the ocean – a detail ALL other geographers have missed.

The Biblical use of the word “SEA” in reference to an inland fresh water lake is indeed “SEA“:

OT – “Even unto the edge of the SEA of Chinnereth (Galilee) on the other side Jordan eastward. (Joshua 13:27)

The Bible does distinguish between fresh and salt water seas:

All these were joined together in the vale of Siddim, which is the SALT SEA. (Genesis 14:3)

Then your south quarter shall be from the wilderness of Zin along by the coast of Edom, and your south border shall be the outmost coast of the SALT SEA EASTWARD: (Numbers 34:3)

And their south border was from the shore of the SALT SEA, from the bay that looketh southward: (Joshua 15:2)

…the same day were all the fountains of the GREAT DEEP broken up (Genesis 7:11)

…bringing them across the GREAT DEEP into the promised land; (Ether 7:27)

…our fathers brought across the GREAT DEEP? (Ether 8:9)

Most Book of Mormon cities were located along the SEASHORES, because the “seas” were actually Fresh Water Lakes. Here are some scriptural references:

15 And they also began in that same year to build many cities on the north one in a particular manner which they called Lehi which was in the north by the borders of the seashore. (Alma 50:15)

29 And also there were many Lamanites on the east by the seashore whither the Nephites had driven them. (Alma 22:29)

Now that we have identified the West Sea, we will look north and identify the Land Northward.