Adjacent to the Narrow Neck was a “pass.” The nature of this pass has eluded Book of Mormon geography enthusiasts since time immoral. These are the references:

22 Now when they found that they could not obtain power over the Nephites by the pass they began to dig down their banks of earth that they might obtain a pass to their armies,

24 There were about fifty who were wounded, who had been exposed to the arrows of the Lamanites through the pass, but they were shielded by their shields, and their breastplates, and their head-plates, insomuch that their wounds were upon their legs, many of which were very severe (Alma 49)

5 And it came to pass that I did cause my people that they should gather themselves together at the land Desolation to a city which was in the borders by the narrow pass which led into the land southward. (Mormon 3)

9 And he also sent orders unto him that he should fortify the land Bountiful, and secure the narrow pass which led into the land northward lest the Lamanites should obtain that point and should have power to harass them on every side. (Alma 52)

The Narrow Neck connects the Land Northward to the Land Southward. The Narrow Passage is within the Narrow Neck. The Hebrew word for “passage” is ma`abârâh and means: “a crossing-place (of a river, a ford; of a mountain, a pass)” and is translated: “ford, place where . . . pass, passage.” (Lexicon of the Hebrew Bible, James Strong.)

Hints: The Narrow Neck was along the Sea West, not East. On the right of the Neck was the Sea that Divides the Land. This encompassed the Tonawanda Plains that lies between the Niagara Escarpment on the north and the Onondaga Escarpment on the south.

The following map shows a breach in the Onondaga Escarpment. This was the “pass” which “passed” through the escarpment into the Narrow Neck. 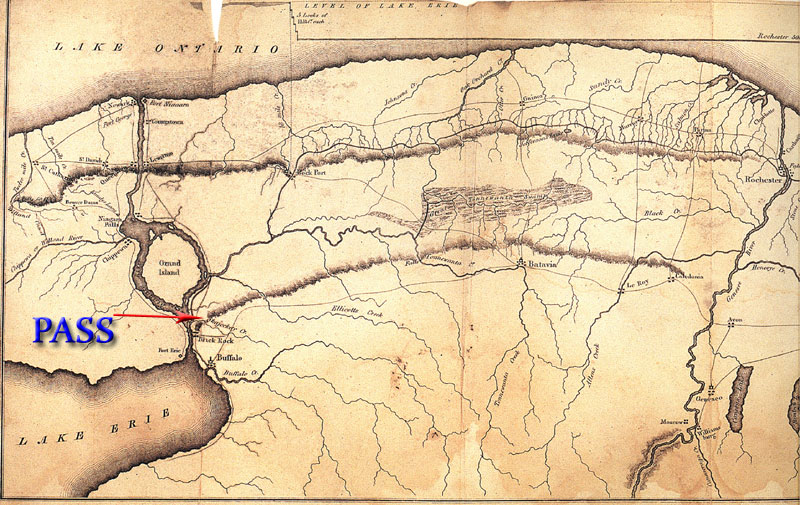 Two thousand years ago ancient Lake Tonawanda was considerably larger and in fact was the Sea South of the Jaredite Land Northward and the Sea East for those crossing the Narrow Neck.

To sum up, the PASS was a breach in the southern boundary (Onondago Escarpment) of the Sea South near its furthest point west along the Sea West. The Onondaga Escarpment however has been reduced as stone was removed for constructing buildings and roads.