It says that after the Jaredites were destroyed, the land was desolate of timber. Later, when the Nephites traveled there, they became numerous and established a logging industry by way of shipping. If one were to look at a map for adjacent areas where they may have gone for timber, we can see that Irondequoit Bay would have been the ideal place. 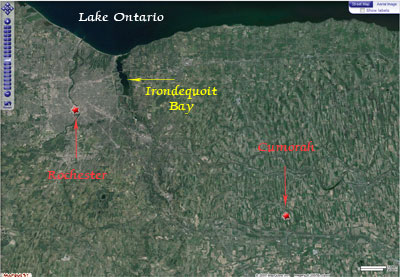 This will explain the reason Mormon chose the Land of Cumorah for their final battle. He had been there as a youth, probably helping in the logging industry, and was aware of the area—that it was treeless, yet full of drumlin hills they could use strategically.

There are a number of bays and rivers along Lake Ontario/Sea North that lead inland, particularly at Olcott and Oak Orchard as shown on the Land Northward Map. These rivers may have allowed shipping as far inland as Lockport and Medina.