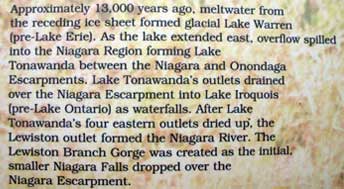 Lake Tonawanda was fed by Lake Erie and drained primarily south via the Sea East until the level of Lake Erie dropped below Lake Tonawanda beginning at the coming of Christ when the Land Northward was split and lifted up as prophesied.

Lake Tonawanda was a prehistoric lake that existed approximately 10,000 years ago at the end of the last ice age, in Western New York, United States.

The lake existed on the southern (upper) side of the Niagara Escarpment east of the present course of the Niagara River between Early Lake Erie to the south and Glacial Lake Iroquois (the ancestor of Lake Ontario) to the north. During the retreat of the glaciers, the water levels of the Great Lakes were higher. Lake Tonawanda was created and fed by the elevated waters of Lake Erie…The lake evaporated when the waters of Lake Erie dropped below the level of the feeder streams to the lake. Subsequently, Lake Erie drained over the escarpment entirely through Niagara Falls, which marks roughly the western terminus of the former lake bed (Wikipedia).

As the waters receded from off the land, the lake became smaller and smaller. Remnants of ancient Lake Tonawanda can still be seen today: 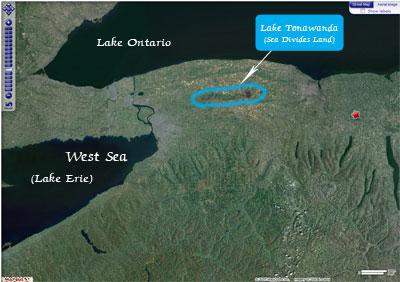 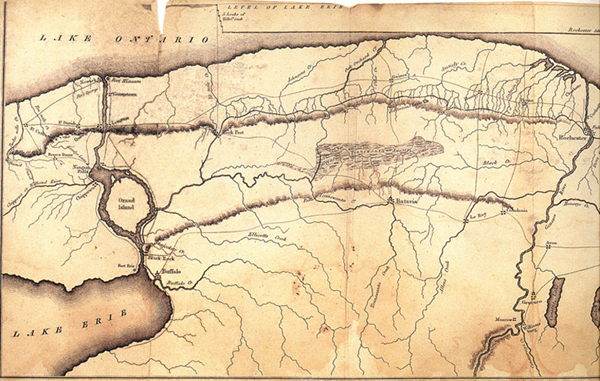 Marshes: The great Tonawanda Swamp, which extends over portions of Genesee and Niagara counties, lies partly in this (Orleans) county. It is twenty-five miles in length from east to west, and from two to seven in breadth. It is bounded on all sides by plains a little elevated above its surface (J. H. Mather, and L. P. Brockett, M. D., A geographical history of the state of New York: embracing its history, government, physical features, climate, geology, mineralogy, botany, zoology, education, internal improvements, &c. With a separate map of each county. The whole forming a complete history of the state. Utica, John W. Fuller & Co., 1851, p. 400).

Those flat plains were an excellent, easy way to cross Book of Mormon lands, from east to west.

To compare the Sea of Galilee with Lake Tonawanda is to give some perspective.

Q. How big is the Sea of Galilee?

Q. Is the Sea of Galilee fresh or salt water?

Q. Is the Sea of Galilee an inland freshwater lake?

These are current ground level images of Lake Tonawanda, it still exists: 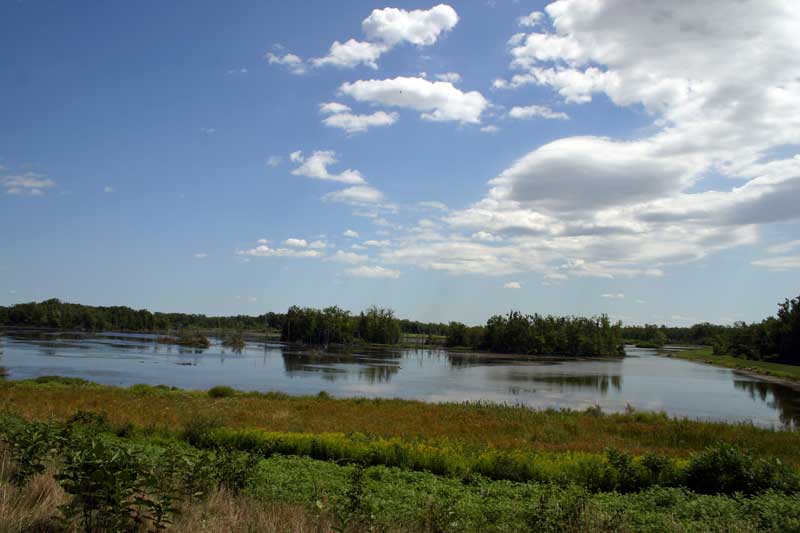 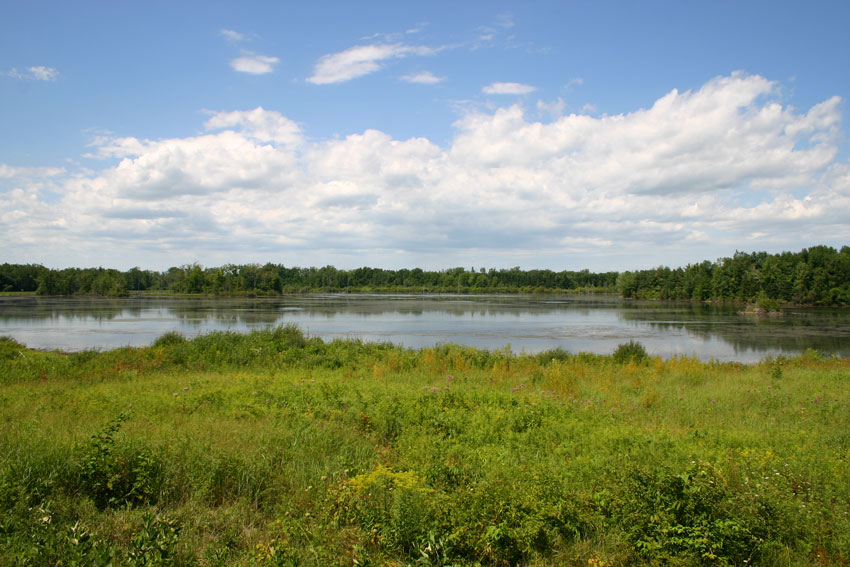 In the following official USA National Wetlands map, the dark blue areas are recognized as “lakes”:

The overall shape of the lake is represented in the following Tonawanda Creek Watershed Area map (geography enthusiasts who use topographical maps as a base for their models need to respect the flow of the water and the lay of the land; we are using an official watershed map, without artistic embellishments).

Please note the direction of the arrows. The entire area today funnels to a single outlet at the Niagara River in the City of Tonawanda. Note the brown area leads to the Narrow Passage, which had a body of water on each side of it, and was just north of the City of Bountiful near Buffalo: 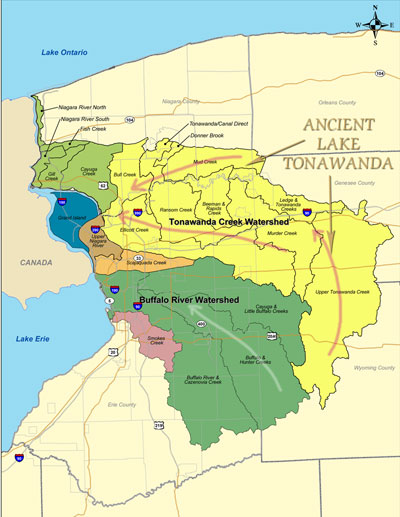 It should be noted that before the land changed at the coming of Jesus, Lake Tonawanda drained in different degrees northward, southward, and eastward (see Land Changed). Today, Tonawanda Creek reminds us of what was once the deepest parts of Lake Tonawanda. When it rains and the water routes are full, it is easy to imagine how it used to be.

Evidence of the current northerly flow of water of Tonawanda Creek is depicted in the feeder that connects Tonawanda Creek to Oak Orchard Creek and flows into Lake Ontario:

“Nearly a century ago the state constructed, and since that time has maintained, a feeder connecting Tonawanda Creek with Oak Orchard Creek in the town of Alabama, Genesee County, N.Y., the purpose of which feeder was to augment the volume of water in the long, western level of the Erie Canal” (The New York supplement, Volume 189, West Publishing Company, p. 573). 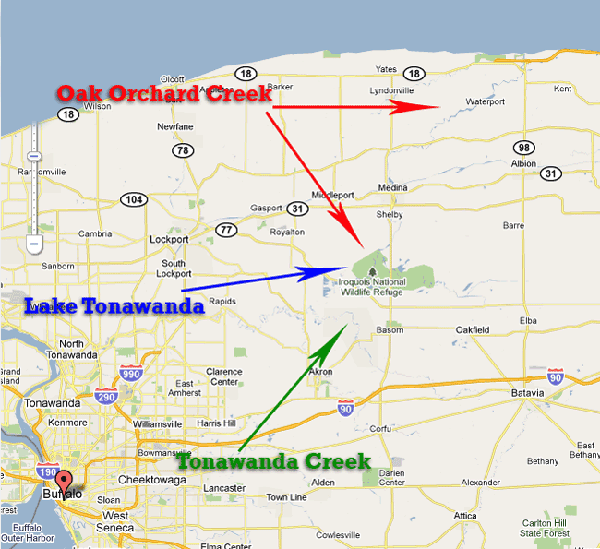 The following map shows east and west drainage along the same latitude with Tonawanda Creek on the left and Black Creek on the right. Primary drainage of Lake Tonawanda is northward by multiple streams and rivers that flow into Lake Ontario. These rivers are of considerable size and may have been used to import timber inland as stated in the text. 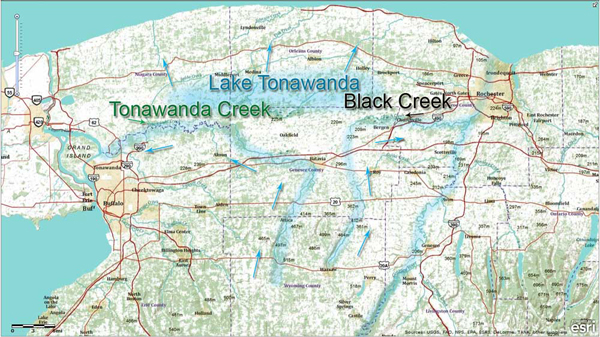 At that time, Lake Tonawanda (Sea South/Sea that Divides the Land & the Sea East – like the number “7”) was draining south on its east side by Batavia and it was that southward flow which was the Sea East.

Remember, Tonawanda Creek is the lowest part of ancient Lake Tonawanda today and it can be traced east to the city of Batavia (Batavia Moraine theory is flawed because it was inaccessible being on the opposite side of Tonawanda Creek and it did not even extend all the way through Lake Tonawanda – or current-day swamp lands) where it makes a sharp turn south and continues to follow the southward flow.

This southward water flow for the Sea East for just that stretch was noted by Frank Leverett:

It is a matter of much significance that these pitted gravel plains appear at levels far below the level of Lake Warren and in positions where it would seem probable that the lake had free access to the ice margin. Those near Oakfield are fully 100 feet below the level of the neighboring part of the beach of Lake Warren, while those along the border of Aliens Creek are 150 to 250 feet or more below the beach. There is a gravel plain just west of Scottsville on the north side of Allens Creek which stands between the 580 and 600 foot contours, or about 275 feet below the beach of Lake Warren. This has been extensively opened for gravel in a direction favorable for showing the mode of formation, there being a pit about one-fourth of a mile long extending from north to south across the gravel plain. The bedding shows that it was built by a stream moving SOUTHWARD away from the ice sheet but up the Genesee Valley. The beds were built out from NORTH TO SOUTH in the form of a DELTA, the topset and foreset beds being well exposed. The dip of the foreset beds is most abrupt in the middle part of the pit, being 25Â° to 30Â° below the horizontal. With the advance of the delta southward the angle of dip decreases to 10Â° or less. The material is a sandy gravel with many stones 2 or 3 inches in diameter. It is, on the whole, finer and less distinctly assorted than in the outwash gravels formed in situations where the water had free escape. If Lake Warren still persisted the material contained in this delta and other gravelly deposits along the southern border of the drumlin belt seems likely to have been forced out by hydrostatic pressure from the edge of the ice sheet into the bordering lake (Frank Leverett, Glacial Formations and Drainage Features of the Erie and Ohio Basins, 1920, p. 694).