ASCENDS TOWARD THE SOUTH

The Narrow Neck itself must ascend toward the South:

And it bordered upon the land which they called Desolation it being so far northward that it came into the land which had been peopled and had been destroyed of whose bones we have spoken which was discovered by the people of Zarahemla it being the place of their first landing and they came from there UP into the south wilderness (Alma 22:30-31)

If your Narrow Neck ascends toward the North (as the Batavia Moraine does), it cannot be the true Narrow Neck spoken of in the Book of Mormon.

ALONG THE WEST SIDE OF BOOK OF MORMON LANDS

a. It should be along the Sea West.

b. It should be on the west side of Book of Mormon lands.

c. There should be a stretch of land 1.5 days wide to the east of it (the width of Book of Mormon lands in other words).

d. The land to its east should be flat and have plains.

e. There should be nothing on the west but the West Sea.

The main proponent of the Batavia Moraine Theory is Phyllis Carol Olive and is supported by Norman David Brockenshire, Vincent Coon, Scott Hamilton and Lee Pearson. The following maps were authored by Olive and are found on each of their web sites, but show how the land looked around 13,000 years ago, not 2000 years ago: 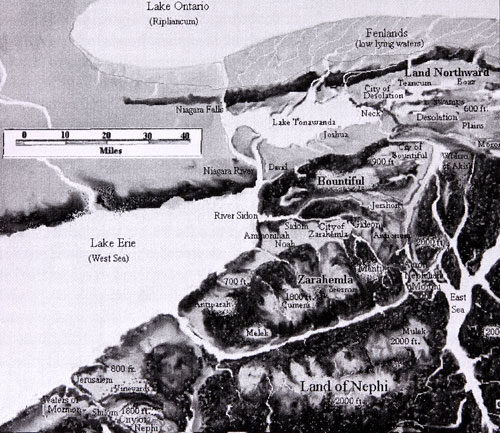 Her placement of the SEAS in the above map is almost comical. Her Sea East is so far east it has no relation to even her Narrow Neck which the Sea East is supposed to border. 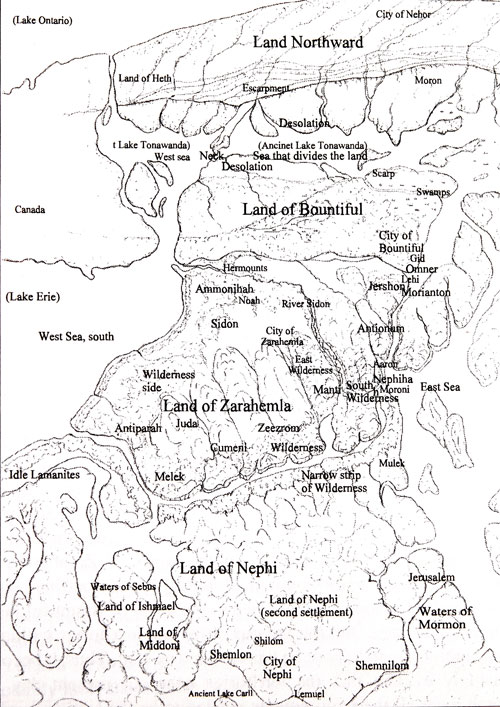 In the above map (of an earlier date) Olive has the Narrow Neck closer to the true location along the west side. Unfortunately, she does not have an INTERNAL MAP void of artistic embellishments. Her art presumes to reflect the topography yet in reality it’s a rendering of her view, which contradicts itself.

Instead, she should produce an Internal Map based on the text so we can see if she understands it and not ignore verses because her interpretation of topographical maps don’t fit. Coon, Hamilton and Pearson need to produce their own Internal Maps before embracing Olives physical interpretations (see the H38 Virus page for further reviews of their maps).

Escarpment: A long, precipitous, clifflike ridge of land, rock, or the like, commonly formed by faulting or fracturing of the earth’s crust.

Inordinate amounts of time are being spent trying to identify “moraines” and “escarpments” as if they’re the smoking gun to show how water pooled or flowed two thousand years ago. It is preposterous to do so when one considers how inept science is at factoring in past cataclysmic events such as earthquakes, droughts, weather changes, or the calamities that occurred at the coming of Christ.

Here are some of the problems with using the Batavia Moraine:

Once again, Olive’s artistic embellishments of Google Earth maps does a disservice to Google’s maps and students of the Book of Mormon. The following image however does show that the water to the west of her neck was too shallow for Hagoth’s “EXCEEDINGLY LARGE SHIPS” and of course there’s still no way to sail “NORTH.”

This is the problem with arm chair geography enthusiasts. What’s in their mind is not what’s on the ground. Olive says:

“The head of Buffalo Creek begins in a wetland in the far southeastern corner of Erie County…” (bookofmormonlands.com/bomlands_016.htm, rtrvd 12/2/11)

The only thing at the head of the Buffalo Creek is a hard wood forested area.

Even today, Tonawanda Creek overflows her banks and floods the City of Batavia every so many years: 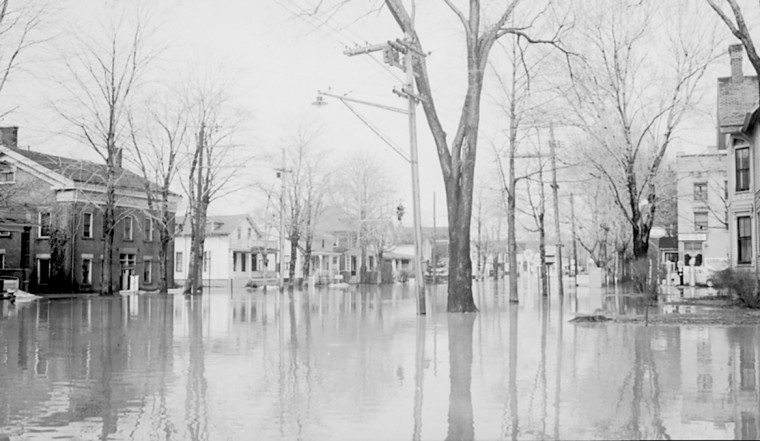 ”Most cellars in the flood zone along South Main street, Pearl street, West Main street were window-deep in water,” The Daily News reported in its Monday editions. ”Officials estimated that 300 to 400 furnace fires were snuffed out by the water that either poured in windows or backed up from sewers.”

Today’s floods were yesterday’s norm. Batavia was under water during Book of Mormon time and the Batavia Moraine was inaccessible. Without an Internal Map, Book of Mormon geographers will change their models according to the faulty interpretations of man. This is the map that Olive based her work on by Frank Leverett – Glacial formations and drainage features of the Erie and Ohio basins, 1902:

Please note our highlights. To reiterate, Tonawanda Creek is the lowest point of ancient Lake Tonawanda (Sea South/Sea that Divides the Land) and is highlighted in GREEN. Also note that it passes in front (or to the left/west) of the city of Batavia which is at the bottom of the map, and the Batavia Moraine extends from it and runs North West towards the City of Lockport. The Batavia Moraine is in orange (Frank Leverett colored all moraines in orange) and in Book of Mormon times would have been inaccessible and surrounded by water.

Especially note there is a 2 mile gap in the Batavia Moraine (see the red square) which Olive failed to show or mention in her maps. This is a little disingenuous because Frank Leverett mentioned it in his book saying:

The western part is so vague that some UNCERTAINTY is felt as to ITS CONTINUATION. (p. 688)

The GAP at the Tonawanda Swamp which separates it from the moraine is less than TWO MILES WIDE. (p. 689)

The description of the Batavia moraine will CONSEQUENTLY be carried EASTWARD ONLY from the Tonawanda Swamp. (p. 689)

Thus, even if a person were to cross Lake Tonawanda / the Sea South – Sea East juncture  it would have taken them nowhere. A two mile gap of swamp water is a FAR DISTANCE and who wants to deal with mosquitoes, poisonous snakes, and other types of animals they had to deal with back then. This is how it looks today with the two mile gap STILL SURROUNDED BY SWAMP WATER ON ALL FOUR SIDES: 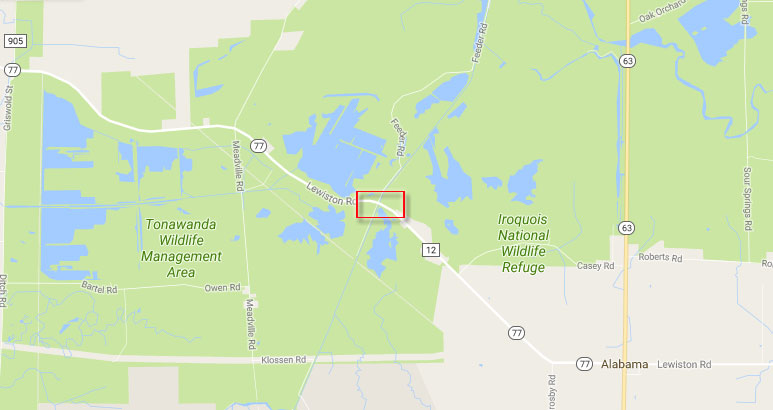 Batavia does not work for distances reasons as already stated. It is a mere 23 miles to the Sea East which is Genesee River & Gorge, and only 35 miles to the Sea West which is Lake Erie. The distance on the line between Bountiful and Desolation from one sea to the other was 1.5 days. It’s assumed that the distance described was for a foot traveler, not a runner, horse, or chariot. The verse referenced a “Nephite” which simply acknowledged the fact that the line was in Nephite territory.

The distance in miles is open to debate. The expression “a day and a half’s journey” is found in the Bible and was used by the American Indians:

A Day’s Journey (Luke 2:44). According to Bishop Cumberland, the day’s journey was thirty-three English miles, one furlong, and five hundred and forty-four yards; and Lightfoot says, a day’s march to the festivals was thirty miles for individuals, and ten miles for companies. A sabbath day’s journey was reckoned 2,000 cubits, or nearly three quarters of an English mile (The Religious Tract Society, Eastern Arts and antiquities Mentioned in the Sacred Scriptures, London, 1840, p. 384) .

Arrian tells us, that Alexander marched from the lake Alexander to Celaene in five days. This is, according to D’Anville’s ancient map of Asia Minor, 1250 Olympic stadia, and 143 English miles by Rochette’s map, and the fame by D’Anville’s modern map of Asia Minor. This makes 250 stadia, or 28.5 English miles, for each day’s march, allowing nothing for the winding of the road. If 1/3 be allowed on that account, each day’s march will be 280 stadia, equal to 32 English miles. Herodotus tells us, that 200 stadia, or 25 Greek miles, equal to 22.893 English miles, was a day’s journey for a foot traveller; and that 150 stadia, or 18 3/4 Greek miles, was a day’s march for an army. Strabo assigns 250, or even 300, stadia for a day’s journey for a foot traveller; and Procopius mentions 210 as the usual computation. Vegetius, at a time when the Roman discipline began to decline, says, that the usual daily march of the army was 20 miles, which was performed in five hours; and that if they accelerated their pace, they could march 24 miles in the same time…Vegetius tells us, that in his time the weight of the armour and provisions, which was carried by the Roman soldiers on their long marches, amounted to 60 pounds (Arrian’s voyage round the Euxine Sea, translated by Arrian, William Falconer, Thomas Falconer, 1805, pp. 159-160).

The width of Book of Mormon lands at Bountiful and Desolation was therefore 50 miles. If the width of the Land Bountiful in your model is much more or less than 50 miles, it’s wrong.

Squire mentioned wooden fortifications along the Batavia Moraine, but those postdate Nephite forts and all Nephite fortifications were destroyed by the Lamanites (Mormon 5:5). The only fortifications we should expect to find after 1400 years would be earthen walls. The city with the largest earthen walls was the City Bountiful. On our Land Southward page we identify the City of Bountiful as modern day Buffalo. Early discoverers of the area did in fact find an earthen wall surrounding it, with a cache of tools, weapons and utensils numbering in the thousands.