With the River Sidon identified, we can identify the location of the city and land of Zarahemla.

We may surmise that because the Lamanites and robbers occupied the Western Seashore, the Mulekites would have avoided them and ventured inland, no doubt following the Buffalo River as they went.

There is a nice piece of land between the Buffalo River and its middle fork (Cazenovia Creek), just before the hills. This location fulfills all requirements for the Land and City of Zarahemla and is called East Aurora on maps. The city center, however, would have occupied the flatter areas of Aurora with the surrounding hills for fortification. 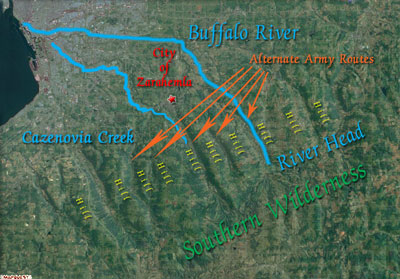 There is even archaeological evidence to support the claim.

The following is taken from the Pioneer History of the Holland Purchase of Western New York: Embracing Some Account of the Ancient Remains by O. Turner, 1850:

Upon the middle branch of Buffalo Creek, three and a half miles from the village of Aurora, on the Seneca Indian Reservation, there are the remains of one of the largest class of ancient fortifications. A raised work, or mound of earth, enclosed an area of two acres. It occupied a bluff point, overlooking a bend of the stream, its location evincing much of modern military science. In an early period of the settlement of the country the whole work could be distinctly traced. Upon the spot and in the immediate vicinity, almost as often as the plough or the spade is put into the ground, relics, clearly distinguishable from those that mark the later occupancy of the Indian race, are found.

As in other instances, the spot had attractions for the successive Indian Nations that possessed this region of the Lakes – the Eries, the Neuter Nation, and the Iroquois; for there are palpable evidences of a continued occupancy, extending down to our own period. Second, and even third timber growths were apparent over a space of fifty or sixty acres. When the French Franciscan and Jesuit Missionaries, and Fur traders, came to this region, they undoubtedly found there a considerable settlement of the Iroquois, and made it one of their principal stations. The author found in the possession of Mr. John T. King, the present owner of the land, numerous relics he had ploughed up in his fields, and among them two large French padlocks; (*This is pure speculation as to their origins. See note below.) one of them, especially, in its rude construction, marking an early period of the science of lock making. It is of a size unparalleled in locks of modern construction, unique in shape, resembling the padlocks that we see in pictures, upon the doors of ancient castles, prisons, and monasteries. Intelligent foreigners say that such locks are found now in France and Germany, but are regarded there as those of primitive construction. The padlocks were both locked; from which circumstance we may infer that the French made a hurried evacuation of the locality, during one of the periods of hostile demonstrations on the part of the Iroquois; and it is not likely that such articles would have been left behind in a peaceful or premeditated departure.

Ancient Record, or Tablet. – In the year 1809, a COPPER PLATE was ploughed up in a field belonging to Mr. Ephraim Woodruff, the early pioneer blacksmith, in Willink. (now Aurora.) Those who saw it differ in reference to its size; the average of their recollections would make it twelve by sixteen inches; in thickness not far from the 8th of an inch. It had engraved upon one side of it, in regular lines, extending the whole width of the plate, what would appear to have been some record, or as we may well imagine some brief code of laws, in manner and form, like the tablets of the early nations to which allusions are made in both sacred and profane history. The letters, hieroglyphics, or characters, are described as having a close resemblance to the “old fashioned printed music notes.” Upon the reverse side of the plate at each corner, there was an engraved image, resembling, (in the language of one of the author’s informants,) some of the pictures in Stevens’ work on the ruins of Central America.

Unfortunately for those who take a deep interest in this branch of American history – who are eager to catch even glimpses of that which is involved in so much obscurity, the mysterious plate was a sacrifice to the exigencies of that early period of settlement: – After being looked upon with wonder, (as it would be now,) those who possessed it, and were somewhat unmindful of its value, allowed it to be worked up – converted into kitchen utensils – a dipper and a skimmer. They were not Antiquarians, as must be inferred, and a sheet of copper in those primitive times, was a rarity that must have strongly inclined them to utilitarianism. A surviving son of the early blacksmith, who worked up the plate, is quite confident that he did not hammer out the whole of the engraved lines. All traces of the dipper are lost, but it is confidently believed that the skimmer has been preserved in a branch of the Woodruff family, now residing at the west. If so, and there are any portion of the engraved lines yet legible, it will be put into the hands of some one competent to the task of interpretation. But a partial understanding of the character of the mysterious relic, can, however, be anticipated. But we may well infer, that the plate, had it been preserved entire, would have furnished something more decisive than any that has yet been discovered; and perhaps, have determined what race or people it was that history, and even tradition has lost sight of; but of whose occupancy of this region, there are so numerous and palpable evidences. (p.668-669)

*There is an inclination to attribute all metal, such as axes, shovels, and locks, to early European settlements. However there were not any. Most of these findings can rightly be dated to Book of Mormon times. They used many metals or at least “some” of the more advanced Nephites did.

The following was also taken from the Pioneer History of the Holland Land Purchase:

Aurora and its vicinity, seems to have been a favourite resort not only for the ancient people whose works and remains we are noticing, but for the other races that succeeded them. Relics abound there perhaps to a greater extent than in any other locality in Western New York. An area of from three to four miles in extent, embracing the village, the ponds, the fine springs of water at the foot of the bluffs to the north, and the level plain to the south, would seem to have been thickly populated. There are in the village and vicinity few gardens and fields where ancient and Indian relics since not found at each successive ploughing. Few cellars are excavated without discovering them.

Upon the farm of M.B Crooks, two miles from the village, where a tree had been turned up, several hundred pounds of axes were found; a blacksmith who was working up some axes that were found in Aurora, told the author that most of them were without steel, but that the iron was of superior quality. He had one that was entirely of steel, out of which he was manufacturing some edge tools. (Turner, p. 30-31)

Is there any wonder, any question, that indeed East Aurora IS the Land of Zarahemla. It’s temple location has also been located and is being protected: Zarahemla Temple Today