Vaughn E. Hansen stayed under the radar quite well for a number of years with his first book on Book of Mormon geography – Discovering Book of Mormon Lands, Cedar Fort, 1997. His second book, also by Cedar Fork, is titled Cumorah: Great Lakes Region Land of the Book of Mormon, published in 2011.

Hansen is one of only two geography enthusiasts to switch their models. The first was Edwin Goble, who coauthored (with Wayne May) This Land: Zarahemla and the Nephite Nation, 2002. Whereas Goble changed from a Great Lakes model to include Mesoamerica, Hansen did the opposite and switched from Mesoamerica to the Great Lakes area.

Here are some quotes:

2. “A review of these prior publications will not be discussed because the primary essence of my publication will be to share with you a detailed summary of more than 350 statements about the land of the Book of Mormon.” (p. XI)

3. “We build upon a solid foundation when we accept what is written in the Book of Mormon. However care must be taken to avoid personal interpretations not consistent with the entire written record. That is why 350 scriptures in the Book of Mormon about lands, communities, and seas have been included in this book. ” (p. 2)

4. “Zarahemla and Nephi were in a generally north-south orientation, not in an extended southwest direction as some writers have suggested.” (p. 16)

5. “The existence of a narrow strip of wilderness between Nephi and Zarahemla adds to the difficulty of estimating the size of book of lands.” (p. 20)

6. “I believe the river Sidon is the Genesee River   that now flows north to Rochester and discharges into Lake Ontario. One of the Finger Lakes could the sea east.” (p. 41)

7. “These scriptures support the statement that the narrow neck, narrow pass, or passage is the narrow strip of land west of Buffalo and Niagara in New York state.” (p. 47)

1. One might ask, “If you thought you were right before, why should we trust you now?”

2. Hansen took this same position with his first attempt saying:

“A review of prior publications will not be discussed nor evaluated, because the primary essence of this publication will be the record in the Book of Mormon itself and the corresponding physical evidence. ” (Vaughn E. Hansen, Discovering Book of Mormon Lands, CFI, 1997, p. 4)

You want us to trust your conclusions and yet you haven’t studied the research before you? According to Hansen, the book that influenced him to change his mind was the 1948 book by E. Cecil McGavin and Willard Bean entitled The Geography of the Book of Mormon.

Had Hansen studied the writings of others he would have discovered the work of McGavin and Bean 14+ years earlier and could have saved himself the embarrassment, or as he put it, the need to “eat crow.” (Vaughn E. Hansen, Eating Crow: How My Research Proved I Was Wrong, November 11, 2012)

In fact, Hansen’s model is so much like Dr. Duane R. Aston’s, with his River Sidon as the Genesee River; the Niagara Peninsula as the Narrow Neck; and the Land Northward in Canada, that one would conclude he plagiarized it. (See Duane R. Aston, Return to Cumorah, 1998 and The Other Side of Cumorah, 2003, both readily available at all church bookstores.)

3. “Avoid personal interpretations.” That’s the same thing every other modeler said. It matters not how many scriptures you cite.

5. “The existence of a narrow strip of wilderness between Nephi and Zarahemla adds to the difficulty of estimating the size of book of lands.” That is not accurate. The east to west width was stated as 1.5 days wide. There are other distances given which confirm that. The width from Zarahemla to the East Sea less than a day (Alma 58:14, 24-25).

Like most modelers, Hansen failed to identify those land distances. His model is vague when it comes to the East Sea. In any case, if Batavia was Zarahemla, it would take much longer to reach his proposed East Sea. The wilderness between Nephi and Zarahemla had zero influence on how wide their lands were.

6. “I believe the river Sidon is the Genesee River.” The City of Zarahemla was next to the River Sidon, not 25 miles away as it is in his model. (Batavia to Genesee River).

They readily crossed the River Sidon and baptized in it, which is not a possibility with the Genesee River/Gorge, which is nicknamed Grand Canyon of the East.

7. “Narrow pass, or passage is the narrow strip of land west of Buffalo and Niagara in New York state.” That is one of the most ridiculous theories ever. To reach the Niagara Peninsula one must first cross the Niagara River and Gorge. Anyone who has seen pictures of Niagara Falls knows that is insurmountable on foot and there is never any mention of using boats to reach the Narrow Neck.

Hansen also missed the “small” characteristic. Not only was the strip “narrow” it was also “short”:

32 There being a SMALL NECK OF LAND between the land northward and the land southward. (Alma 22)

The Niagara Peninsula is 50 miles wide. It is impossible for that distance to seem “small” from EYE LEVEL!

9. Disregard for fulfilled land prophecies and promises. The government of the United States IS the prophesied New Jerusalem that would be in place prior to the Book of Mormon coming forth. The New Jerusalem would be built on ancient Book of Mormon lands, which does not include a land with a King or Queen, i.e. Canada. 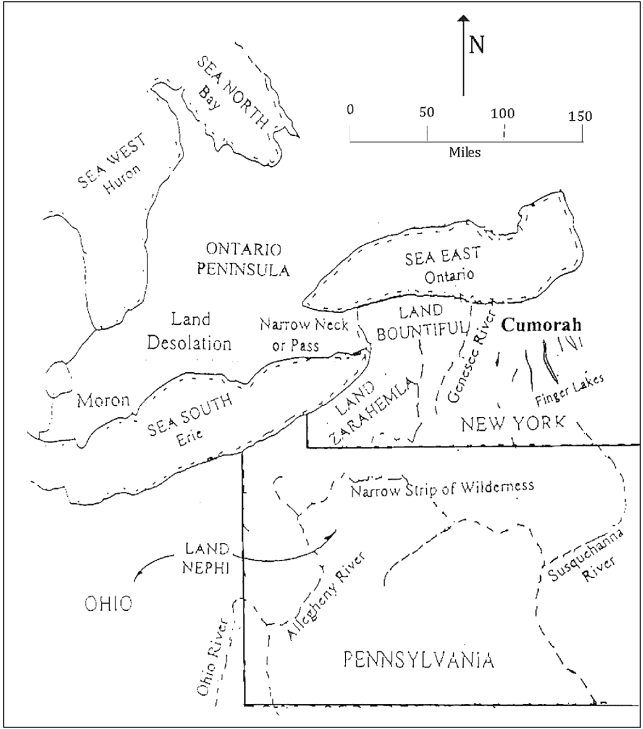 Previous: The Errors of Norman David Brockenshire
Next: Book of Mormon Archaeological Forum