“Now the Lamanites…were a wild and ferocious…believing…they were wronged in the wilderness…and again…while in the land of their first inheritance after they had crossed the sea” (Mosiah 10:12-13)

A good candidate for their landing spot is Presque Isle Bay in Erie, PA. This natural harbor has been there many thousands of years and would have been an ideal place for them to stop. From there it is sixty miles to Cattaraugus Creek—the Line of Possession. This would have provided a buffer zone between them. 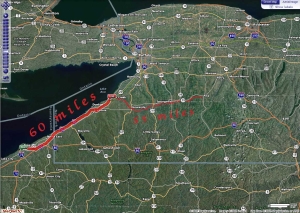 A close up of Presque Isle Bay: 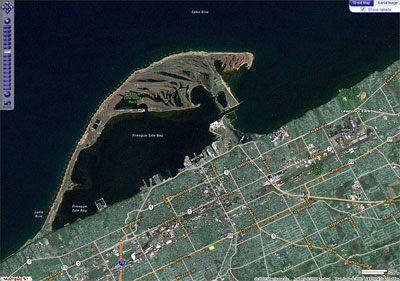 Nephi fled north from this location to get away from his brothers; it says he traveled many days to try to put some distance—a buffer zone if you will—between he and his brothers:

5 And it came to pass that the Lord did warn me, that I, Nephi, should depart from them and flee into the wilderness, and all those who would go with me.
7 And we did take our tents and whatsoever things were possible for us, and did journey in the wilderness for the space of many days. And after we had journeyed for the space of many days we did pitch our tents.
8 And my people would that we should call the name of the place Nephi; wherefore, we did call it Nephi (2Nephi 5:5,7-8)

No doubt it was wisdom in God to lead Nephi toward the Mulekites in Zarahemla when the time was right.